Dell Venue 8 Pro tablet can be grabbed for $99 today

You’ve got a very short window to be shopping for the Dell Venue 8 Pro at a discount. Microsoft has kicked off its 12 Days of Deals in celebration of Christmas and today is the first day. We’ll see the last of the offers on December 20. But until then, you can probably expect some great bargains like this $99 Windows 8.1 slate.

There’s a catch however, and you’ve probably found this out if you walked into a Microsoft outlet to buy the tablet. Only the first 20 customers were slated to get it at the reduced price. CNET reports that up to 100 online customers would be able to avail of the deal. The cost after the early bird slots are taken rises to $199. 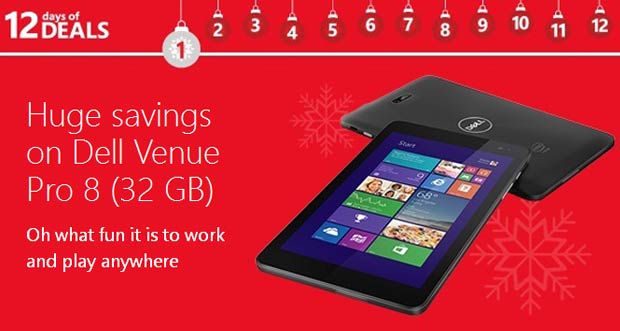 Some brick-and-mortars are said to have stocked up on only 10 units of the Venue Pro 8. The original price of the hardware is $299; meaning it’s a bargain at $99 or $199. It will continue to sell for $199 until supplies run out. The offer extends to the US and Canada only.

Microsoft will be vending 11 more gadgets at lowered prices over the next few days. We don’t know their names yet but there are chances of some Lumia phones making it to the pot. The current deal is limited to one tablet per customer, so it’s likely that the rest will work the same way.

Facebook
Twitter
Pinterest
Linkedin
ReddIt
Tumblr
Flip
Previous articleNo Glasses 3D Tablet from Hammacher Schlemmer could do with a better name
Next articleNokia RX-115 tablet has its stealth broken, is it the upcoming Lumia 2020?