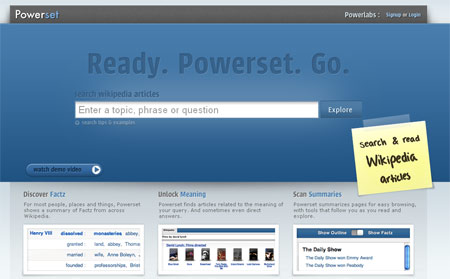 Microsoft has announced to acquire Powerset, a online search engine. The news of Powerset being acquired by Microsoft was speculated for last few days. Today both the companies confirmed the news however they did not disclose details of the deal.

“Powerset brings with it natural language technology that nicely complements other natural language processing technologies we have in Microsoft Research.More importantly, Powerset brings to Live Search a set of talented engineers and computational linguists in downtown San Francisco. This is a great team with a wide range of experience from other search engines and research organizations like PARC (formerly Xerox PARC),” wrote Satya Nadella, Senior Vice President, Search, Portal, and Advertising.

While, Mark Johnson expressed his views regarding the deal on Powerset blog. “Building a large-scale semantic search engine is expensive, requiring an engineering effort and computing resources beyond what most start-ups could ever imagine. Because our goals around improving search align so well, Powerset has decided to team up with Microsoft. We believe that this is the fastest way to bring our technology to market at a large scale,’ wrote Johnson.

Powerset is a San Francisco-based company, which will remain its base there itself ever after the acquisition. Powerset was founded in 2005 by Foundation Capital, Founders Fund and Paperboy Ventures.