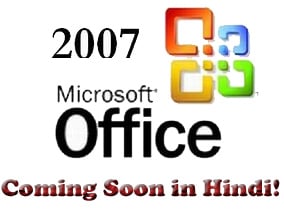 Microsoft India has announced the availability of the fully localized Hindi version of its 2007 Microsoft Office software. This Hindi edition will be available with Microsoft Office Professional 2007 and Microsoft Office Standard 2007 versions. Microsoft had made a commitment under Project Bhasha, which is a program that the company launched in India in September 2003, to promote local language computing in the country.

According to Microsoft, the Office Professional 2007 software will deliver small businesses with a complete set of productivity tools that will help employees save time, stay organized and work more effectively with formation. Whereas, the Microsoft office Standard 2007 software will provide home users and small businesses with an essential software suite that will enable them to quickly and easily create documents, spreadsheets and presentations as well as to manage emails.

Pankaj Ukey, Office System-Product Lead, Microsoft Corp. India, commented on the launch of the Hindi version of 2007 Microsoft office, saying, “The need for local language software is crucial to deliver the benefits of IT at the grassroot level in a multilingual country like India. So it was our endeavor to bring in the fully localized version of 2007 Microsoft Office in Hindi immediately after the launch of 2007 Microsoft Office. This is a break through product which will enable people work faster and better and be more productive both at home and at work. The Hindi version will help us extend these benefits to over 3372 million Hindi speaking population in the country.”