A lot of OEMs have experimented with water-resistant smartphone designs and while many of them haven’t succeeded, Indian handset maker Micromax could be taking the risk and developing a phone of its own under the Splash moniker. Images of the handset have been leaked online along with various other details.

Twitter user @MMXNewscaster is responsible for details regarding the Micromax Splash handset and the leakster has also provided technical information to BRG India. The smartphone will feature IP67 certification. This basically means that the handset can be submerged underwater for a period of 30 minutes max and at a depth of 1 meter. The phone will also be dust-resistant like various handsets from Sony. Even with clear images of the phone available, it’s hard to tell what measures have been taken to make ports easily accessible and at the same time, secure. 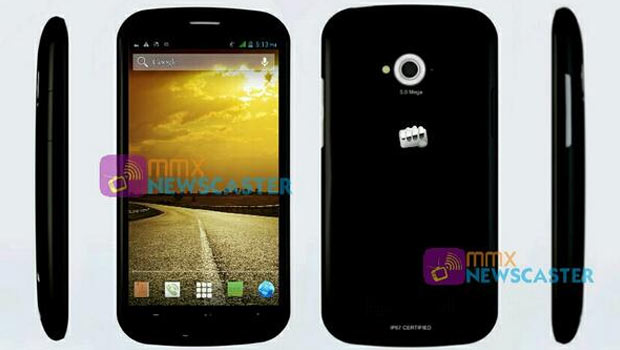 Where the design is concerned, the Micromax Splash has a pretty mediocre form factor and looks quite similar to other handsets from the company. And specifications-wise, don’t expect the phone to compete against similar products from other OEMs. The device will come preloaded with Android 4.1 Jelly Bean and it will have a 4.5-inch qHD 960 x 540p touchscreen. On the inside, a dual core processor clocked at 1GHz will deliver the steam and there will be 512MB of RAM and 4GB of storage. There’s no mention of a microSD card slot. Other features of the phone include a 1760mAh battery, a 5MP camera and dual SIM slots.

There’s no word on when the Micromax Splash will go official and judging by the specifications, we don’t expect it to be heavily priced.

Keys specs are listed below: