After focusing a lot on the budget smartphone segment, Micromax is going back to Android tablets through its new Canvas Tab P480 release. The device is designed for basic needs and is aimed at first-time buyers with a retail tag of just Rs 6999.

The slate’s main competition will be the new Lenovo Tab 2 A7-30 series which aims to deliver voice calling capabilities and basic Android features on a budget. Compared to the Micromax Canvas Tab P480, the former does have the upper hand in design, but not in price.

Micromax’s new device is 3G enabled for data access and it features an earpiece just above the display for making calls. Additionally, you’ll be able to throw in two SIM cards, but only one will have HSPA+ support. Coming to the display, the panel spans 7 inches wide with WSGA resolution of 1024 x 600 pixels. 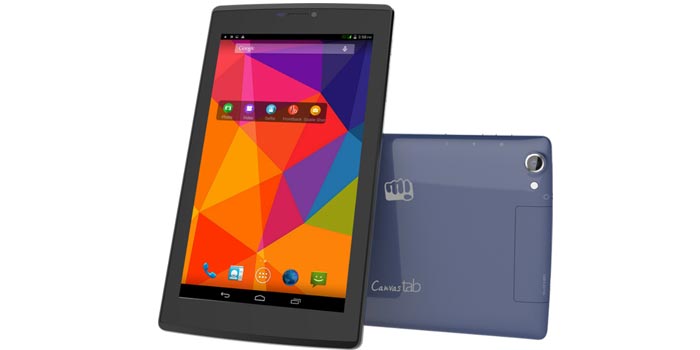 Also fitted to the exterior are dual cameras where a 2MP shooter can be found on the front and a 5MP imager on the rear. The innards are pretty much what you’d expect from an entry-level Android device. The heavy lifting is done by a 1.3GHz quad core processor, while memory of taken care of by 1GB RAM and 8GB storage.

And coming to the software, the Canvas Tab P480 is powered by KitKat with Lollipop slated to arrive later on. The company has also preloaded various apps including Hello TV with a 1-month subscription to live TV, access Saavn Pro for 3 months and Truecaller with 6 months of premium membership.

The Micromax Canvas Tab P480 will be available for purchase in blue and white options starting next week.