Not long after the new Yu smartphone made its debut another Micromax device, the Canvas Nitro 2, showed up online. The phone was quietly put on sale via an ecommerce website sans any official launch or word about its availability.

Well, there’s a good chance that the company is planning to give the Micromax Canvas Nitro 2 a formal unveiling considering its predecessor got a lot of love online. Then again, the new phone isn’t much different than the previous device and it can be seen as a cheaper alternative with slightly lower specs.

The original phone arrived with a 1.7GHz octa core processor, but this one has a slower chipset with a clock speed of 1.4GHz. Also, Micromax has modified the design where it has dropped the alluring faux leather look for a normal matte finish. 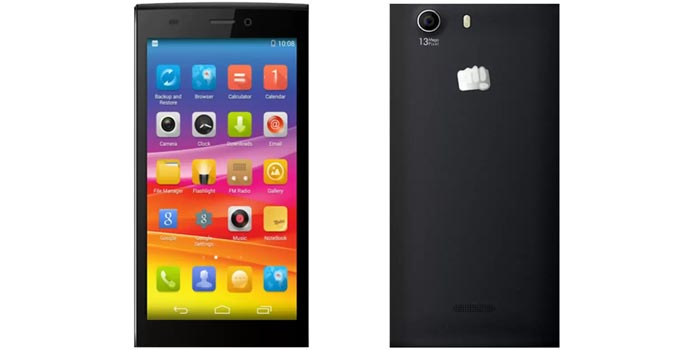 Apart from the aforementioned changes, the Canvas Nitro 2 is basically the same as its predecessor. The phone has a 5-inch 1280 x 720 pixel IPS LCD touchscreen for visuals. And Android 4.4 runs the show which is quite disappointing mainly since we’ve already seen the company release a good deal of phones with Lollipop onboard.

Additionally, there’s no mention of whether the Micromax device will be seeing an update in the near future or not. Other features onboard the smartphone include dual SIM support, 2GB RAM, 16GB storage, a 13MP main camera, a 5MP front shooter and a 2400mAh battery.

The Micromax Canvas Nitro 2 can be purchased for Rs 10399 through Infibeam in black only.