Micromax appears to have quietly launched a new smartphone into the market under the Canvas Juice 2 AQ5001 moniker. The handset has popped up on e-commerce website eBay and someone is also selling it on OLX with prices slightly over Rs 9000.

It comes as no surprise that the company has launched a device without an official unveiling, but the Micromax Canvas Juice 2 isn’t an ordinary release. The phone is the second from the OEM to offer Android 5.0 Lollipop out of the box, the first being the Canvas Fire 4. Also, we’re yet to see the device get listed on the main website. 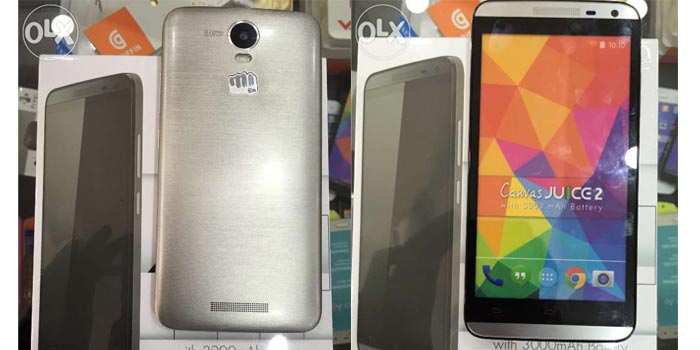 Both sellers have provided quite a bit of information on the Micromax smartphone, but we’re yet to get a complete look at the handset’s design. Based on what we have, it looks like the phone has taken quite a few cues from the HTC One M9 on the front, while the rear has a brushed metallic finish.

It looks like the handset will deliver a stock experience with Lollipop. The hardware information provided puts the Canvas Juice 2 in the mid-range segment as it offers a 5-inch 720p HD IPS display. The handset also packs 2GB RAM, 8GB storage and a 1.3GHz quad core processor.

There’s a good chance that the Micromax Canvas Juice 2 will get an official unveiling in the coming days. Nevertheless, you can try your luck by purchasing it via eBay and OLX, although we wouldn’t advise it.