The Micromax Canvas Duet 2 seems to be in the works and just like the recently-released Canvas Blaze, it is a CDMA device. This dual SIM smartphone is also compatible with GSM mobile networks. It has not gone official as yet, but a picture of the device’s packaging has been leaked on the web.

Reportedly, this handset is compatible with all CDMA networks in India. The device with the model number of EG111 comes across as a Galaxy Grand 2 rival as it shows off a 5.27-inch touchscreen that is deployed with the IPS technology and renders visuals in HD resolution. A 2MP webcam has also been thrown into the mix for allowing users to make conference calls. 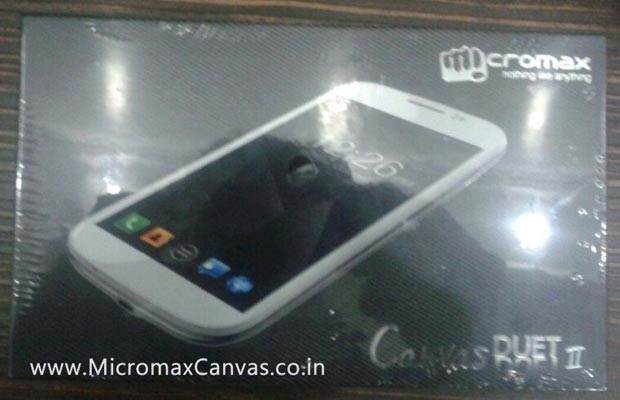 As for the primary camera, the device features an 8MP one that should tag along attributes like auto focus, LED flash, video recording capability and more. The Micromax Canvas Duet II makes the most of a quad core processor ticking at 1.2GHz and apparently, it relies on the version 4.1 of the Android Jelly Bean OS.

And what’s more, an entire gigabyte of RAM has been incorporated along with 4GB of onboard memory, probably expandable by up to 32GB. It draws power from a 2300mAh battery and should be loaded with all the common connectivity features.