Micromax appears to be hell-bent on giving the Moto E a run for its money and it’s willing to unleash multiple 4.4.2 KitKat phones, the Canvas A105 being the third one, to achieve its goal. The smartphone hasn’t gone official as yet from the company, but that hasn’t stopped a retailer from revealing the device online.

The Micromax Canvas A105 is priced at Rs 6,999 just like the Unite 2. It will also go up against Lava Irix X1 and the Q600s from Xolo, amongst others. Design-wise, there’s nothing much to boast about except for the brushed metallic rear panel and the specs are entry-level. You get a 5-inch display with WVGA resolution and a VGA camera on the front, while a 5MP snapper with LED flash is fitted on the rear. 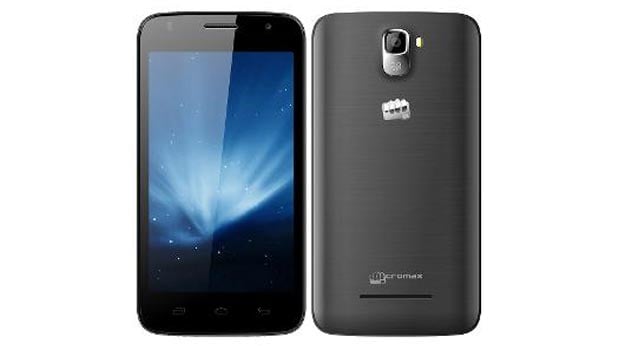 On the inside, there’s a 1.2GHz quad core processor, probably from MediaTek, and a measly 512MB of RAM which should be just enough to run Android KitKat smoothly. As you’d expect, there are dual SIM slots here as well, with HSPA+ support. The handset also features a 1900mAh battery which can deliver around 5 hours of talktime or up to 150 hours of standby.

Here’s an overview of the Micromax Canvas A105 specs:

HomeShop18 currently has the phone up on its website. The handset is, however, listed as out of stock and there’s no mention of when it will be available. Also, a flip cover worth Rs 1,000 will be bundled for free, when the phone goes on sale.