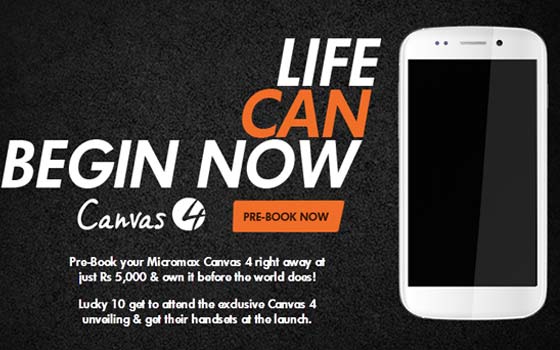 Pre-booking the Micromax Canvas 4 today is a somewhat like being set up for a date. Why so? The reason is simple – Micromax has started accepting reservations for the smartphone, but it hasn’t disclosed much information about the handset, especially where hardware is concerned.

Well, on the bright side, the Micromax Canvas 4 landing website does have images of the device. So far, a white shade is confirmed, but there’s no telling if the phone will arrive drenched in other colors. By the looks of it, the latest flagship will not be much different from its predecessors in appearance. It features rounded edges and a slim metal rim running along the sides.

The rear panel flaunts a 13MP camera which should be able to capture 1080p videos and house a BSI sensor for low-light imagery. Additionally, it also shows of an LED flash and it sports a brushed metal textured finish. The Micromax Canvas 4 will proffer a fairly large touchscreen on the front which we’re assuming is 5-inches wide and a webcam, probably of 2MP. 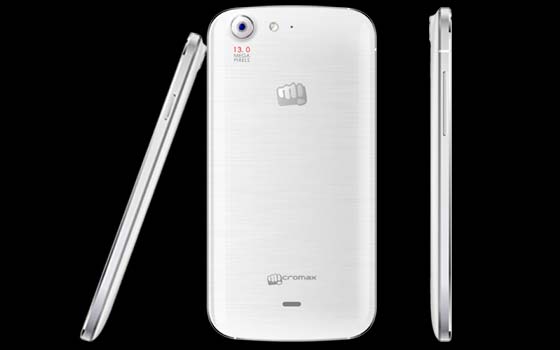 The display’s resolution is unknown, but previous reports have highlighted the possibility of a 1080p panel. As for the internal hardware, we’re putting our money on a Cortex A7 quad core processor (a better SOC is welcomed), 2GB of RAM, 8GB or 16GB of storage and Android 4.2. The company states that 10 lucky fans who book the phone will receive the Micromax Canvas 4 at launch and even get to attend the event.

Fans and potential buyers can currently pre-order the Canvas 4 by paying a deposit of Rs 5,000. The remaining amount will be charged when the phone gets unveiled on July 8 where the official price will also be disclosed. And those who wish to not be ‘a proud owner of the hottest smartphone in town,’ so asserts the company, can cancel their order and have the entire sum refunded. Deliveries are said to commence from the 10th of next month and should be fulfilled in 7 business days. Lastly, the remaining amount can be paid in EMIs of 3, 6, 9 or 12 months.