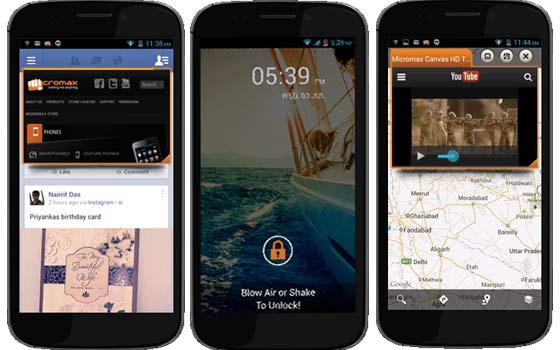 The Micromax Canvas 4 has been officially unveiled in India and the company has disclosed every bit of information about the smartphone, including a price. For those who took a leap of faith in the handset and pre-ordered it, Micromax has revealed the retail price at just below Rs 18,000.

Previous predictions, including some of our own, have been spot on with regards to the hardware components employed within the Micromax Canvas 4. What really comes as a disappointment is that there’s no 1080p full HD panel onboard, as anticipated earlier. Instead, the company has chosen to go with a 5-inch 720p HD IPS display under a protective layer of Corning Gorilla Glass.

One of the latest Snapdragon processors isn’t on the list either as the company has once again opted for a budget-oriented MediaTek chipset, the MT6589 to be precise with quad Cortex A7 cores operating at 1.2GHz and PowerVR Series5XT graphics from Imagination Technologies. At 8.99mm thick, the Micromax Canvas 4 is crafted with an aluminum form factor. 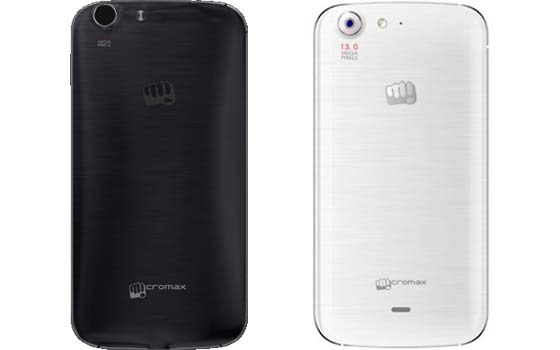 It sports a 13MP Sony stacked image sensor on the rear with AF, 1080p recording and built-in anti-shake technology, while the front flaunts a 5MP camera. Keeping up with tradition, the smartphone comes with dual SIM 3G support. Apart from the aforementioned specifications, it has 1GB of RAM, 16GB of flash storage with 32GB expandability and a 2000mAh battery that can deliver up to 220 hours of standby or 8 hours of talktime.

Coming to the software part, the device runs on the Android 4.2 Jelly Bean platform and it features a host of customizations and add-on tools. They include preloaded applications such as MusicHub, M!Security, Fone Clay, Spuuul, Hike Messaging, Opera Mini and M!Live. Additionally, there’s M!Unlock which can be used to activate the ‘Blow/Shake to unlock’ function.

The Canvas 4 has been launched for a price of Rs 17,999 which puts it in the same category as the Karbonn Titanium S9. Potential buyers will be able to pick up the smartphone in colors of pristine white or smoky grey. The device is being bundled with an aluminum flip cover for free which carries a retail tag of Rs 2,999.