The Micromax Bolt A82 smartphone could soon be making its debut in India as the handset has been listed on the company’s main website. The phone will be your usual entry-level release, but will also come with localized features including support for 20 different languages widely used in the country.

The Micromax Bolt A82 is basically competition to the recently launched Lava Iris 465 which is retailing for Rs 4499. Price and availability details for the former haven’t been revealed as yet, but a listing on Homeshop18 has it tagged at Rs 5499 with the original MRP shown as Rs 6399. 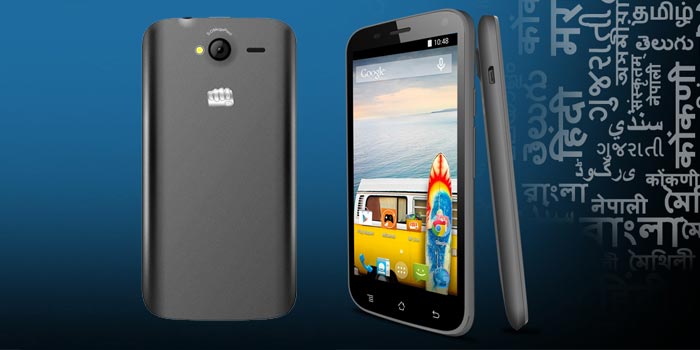 The Micromax smartphone is designed for entertainment as it offers a generously-sized display of 5 inches. The resolution here is pretty basic at FWVGA and we wouldn’t expect much in performance either. Android 4.4.2 KitKat is what you get out of the box along with a stock UI, but there will be preloaded apps such as M! Live, News hunt, Reverie, Chaatz, MAD, Snapdeal and Quickr amongst others.

A 1.3GHz dual core MediaTek processor delivers the steam and there’s a mere 512MB of RAM. For storage, the Bolt A82 offers 4GB internal memory and a microSD card slot. Apart from these features, the smartphone also comes with dual SIM support, 3G connectivity and a 1800mAh battery.

You can purchase the Micromax Bolt A82 through this link and there’s a gift card worth Rs 1000 and a leather flip cover bundled for free.