In a strange development, even before Micromax could make it official, its new Bolt A067 has arrived at the doorstep of a Mumbai-based retail store that has started selling it already. Being offered at an extremely affordable Rs 3899, this new entry-level handset seems to be sporting a red colored rear panel.

Regularly at the forefront of showcasing product images and prices in a premature manner, Mumbai-based Mahesh Telecom has done the same once again. It has posted an image of the Micromax Bolt A067’s packaging on its Facebook page, and has thus revealed most of its important specs. 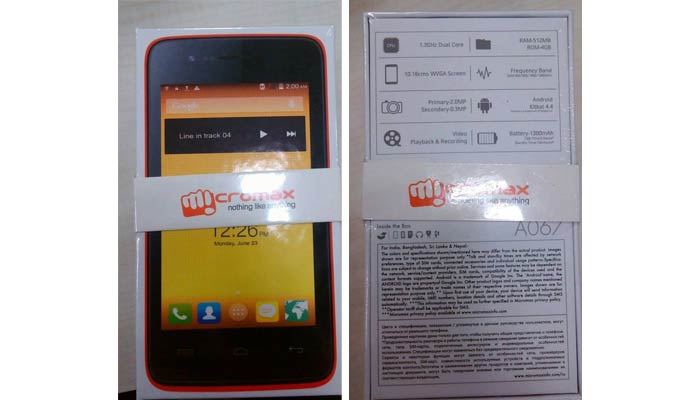 Highlighting them is a 4-inch display which features a WVGA resolution of 480 x 800 pixels. While details about the chipset on the Bolt A067 haven’t been mentioned by Micromax on its packaging, we do know that a 1.3GHz dual core processor will be fueling its operations from within, taking assistance from 512MB worth of RAM.

Device storage of this Micromax handset has been kept tied at 4GB, but there’s most probably a microSD card slot present on it for further expansions of up to 32GB. While a 2MP rear camera has been granted to its rear surface by its manufacturer, a 0.3MP snapper has placed on its front.

A clear look at the specs of the Micromax Bolt A067:

Mahesh Telecom, which has two retail stores in the Mulund area of Mumbai, has confirmed that it’s now selling the new Micromax Bolt A067 smartphone at Rs 3899.