Although we’ve got a price for a new Micromax phone dubbed the Bling 3 A86, the company hasn’t yet admitted to having it up their sleeves. It has turned up online via a couple of retail sites in India, although only eBay has volunteered the price details. For those interested in it, the Micromax Bling 3 A86 price reads at Rs 9,999. It’s a dual SIM handset which is colored in ivory and ‘clearly intended’ for folks with feminine tastes.

If you’re still trying to figure out where you’ve seen this one recently, it’s a kissing cousin of the Blu Amour ‘ladyphone’ which was unveiled early last month, proving to everyone that tackiness never dies. The Micromax A86 has the same Swarovski Zirconia home button, but appears to have ditched the two capacitive keys which sat on either side of this rock, on the Amour. The rear panel sports the familiar quilted design, with the bottom part being decorated by a rosette. 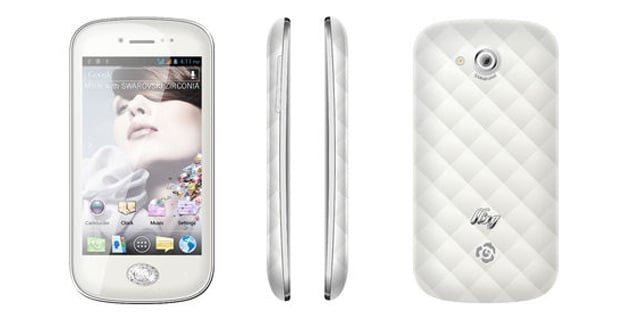 The smartphone runs on Android Jelly Bean 4.1 and features a 4-inch capacitive touch display. It’s powered by a 1GHz dual core processor and probably 512MB of RAM. There’s a 5MP main camera with flash and AF as well as a 0.3MP lens on the front. The device embeds dual SIM slots and may have 4GB (assumption based on Blu Amour’s specs) of onboard memory. The hoarding space is confirmed to be expandable up to 32GB. The A86’s network connectivity only cranks up to 2G and there’s Wi-Fi support too.

Apart from eBay India, Flipkart is the only other retailer to have put up a product page for the Micromax Bling 3. We often see the tags mentioned on eBay to be very different from what other outlets demand, so we wouldn’t say that Rs 9,999 is the final MRP. Also, we’re still waiting for word on the release date.