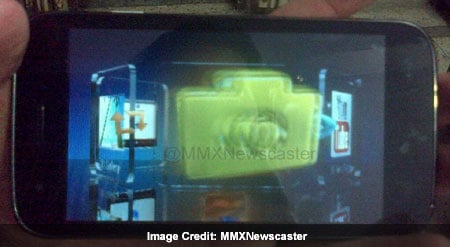 Images of another device from Micromax, the A115 Canvas 3D, have allegedly been leaked online, which depict a model from the Indian manufacturer, allegedly still in the development stage. The company has been quite busy in recent months, and the most notable of its endeavors is the A116 Canvas HD, bringing along Jelly Bean, a 1.2GHz quad core processor and a 5-inch, 720p HD touch screen display.

The A115 has been revealed in pictures by Twitter user MMXNewscaster. A quick scroll over the user’s tweets and it becomes apparent that over the past month or so, several other details of the phone have been ‘outed.’ The user has posted a good deal of specifications relating to the handset on the micro-blogging website, but not everything is there. We are still unable to get a complete picture. 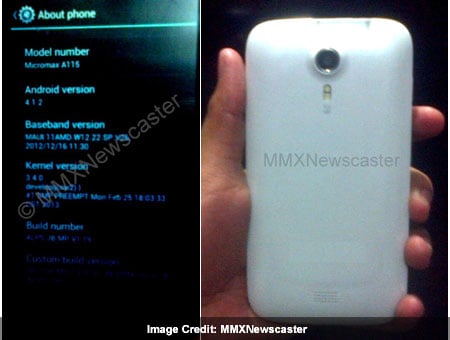 On March 5 this year, it was tweeted that the phone would house a MediaTek MT6589 quad core chipset, the same processor found inside the Canvas HD. But on March 11, an update was posted saying that the CPU would be a dual core MT6577 chip. Screen resolution is thought to be 480 x 800 pixels, while the operating platform, it should come as no surprise, will be Jelly Bean (Android 4.1.2).

The account also points to an 8MP primary snapper on the back and a 2MP webcam on the front for video calling purposes. It hasn’t been specified what features the cameras will be capable of, although an image of the boot screen has been posted (seen below). 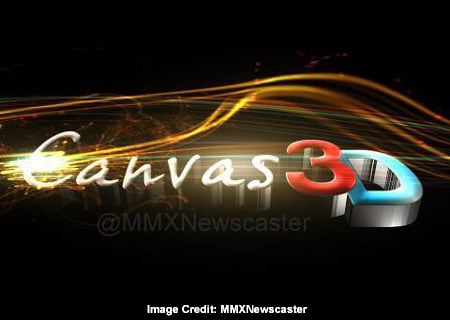 Meanwhile, FoneArena has a little more information. For example, the website adds that the screen will measure 5 inches diagonally and the rear camera will have an LED flash for enhanced photography. It also says that the handset will be capable of rendering images in 3D, although it will not be able to capture in the format, due to a single lens on the back.

It seems all that’s left to find out about the Micromax A115 Canvas 3D is a price. Of course, there isn’t any word on when it will get a release for the country, but if things continue the way they have been going, we’re likely to see the phone on an online retailer before its formal unveiling.

Rumored specifications have been listed below: