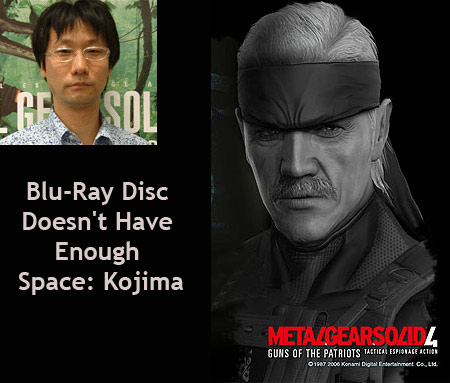 Several big names may be going the Blu-ray way, but perhaps not all are satisfied with the decision. Konami’s video game designer Hideo Kojima is one such example. Apparently the 50GB Blu-ray is not enough for Metal Gear Solid 4: Guns of the Patriots, reported renowned gaming blog Kotaku.

Speaking to Famitsu, Hideo Kojima stated, “For us, we are still not satisfied with the quality we can do. You know, there’s not capacity space.” The interviewer then asked Kojima if he was referring to the Blu-ray, to which the father of Metal Gear replied, “That is correct. There is not enough space at all. There is not enough space. We always talked about where to cut and what to compress.”

It seems, the team had to compress certain parts of the game to fit it on the Sony format, and the foreign voice tracks were entirely cut.

Metal Gear Solid 4: Guns of the Patriot will be released in June 2008 across the globe.

Well coming back to, Kojima’s stance, what do you think? Would you yet prefer “Quality over Quantity”? Do drop in your views below and let us know about the same.