Mexico, India and Africa predicted as the Next Hotbeds of Internet Crime, by F-Secure 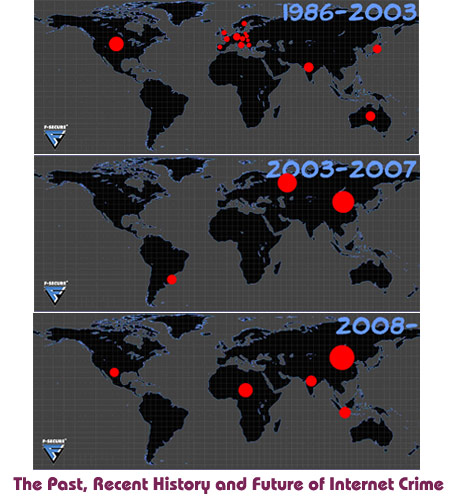 If your system is being affected by a plethora of viruses and malware, and you’re wondering where is it coming from (literally!), then read on.

Experts at F-Secure’s Security Labs have revealed that a major portion of the present day internet crime can be traced in Russia, China and Southern America. It’s in these three places that most internet criminals are sitting in the comfort of their chairs and making life miserable for you and your poor computers. Further on, as specialists foresee security scenarios, in the next five years there will a major rise in attacks from Central America, India, China and Africa.

“Within the last few years, Internet take-up in emerging markets has been phenomenal. For example, Brazil now has over two million Internet users,” maintained Hypponen. “And coincidentally, since 2003, computer crime has really taken off in Brazil, China and the former Soviet countries.”

He envisages that, “The trend is expected to continue and spread into areas such as Africa, India and Central America. This is partly due to the limited IT job prospects in these markets. People are developing sophisticated computer skills, but have limited opportunities to profit from them legally.”

Going back to 1986 until today, the changes in internet crime patterns have been skillfully mapped by the researchers at F-Secure. There are three maps with three different time frames that essentially show how computer crime has grown and how there has been a shift from Europe and North America to emerging markets.

1. The Past, which dates from 1986 to the year 2003: This era consists of traditional virus writers operating from areas in Europe, United States, Australia and India. This period is typified by opportunistic ‘hobbyists’ learning their craft.

2. Recent history, the timeframe from 2003 to 2007: During this era plain hobbies took the face of professional, targeted attacks. Malware creation hotspots burgeoned in the former Soviet countries, including Russia, Belarus, Ukraine, Kazakhstan, Lithuania, Latvia). Brazil and China, had immensely computer proficient individuals, but no proper job opportunities to make a living for themselves in the IT sector. Thus these places became major terrains where criminal activities persisted. It is for such smart unemployed people that online crime often presents a more rewarding path to raising living standards.

3. The Future, the year 2008 and beyond: According to security predictions, Mexico and Africa are likely to become hubs where new e-criminal groups may appear. Furthermore, internet crime could become increasingly complicated with targeted attacks and exploits. This is thanks to the association between broadband penetration and socio-economic factors such as economic development and lack of IT employment opportunities.

Also the usage of the web is increasing by leaps and bounds in Asia, followed by Africa. IT job growth will be lacking behind, giving rise to online criminals.

Furthermore, several nations could witness an impediment in the way the legal system catches up with developments in the IT sector. The political and security issues within a few countries could also result in computer criminals escaping the law due to the diversion in interests.

Though no one has seen the future, the above mentioned predictions could probably be considered as guidelines or perhaps insights into the future of the world of online crime, to thus avert things to go worst.