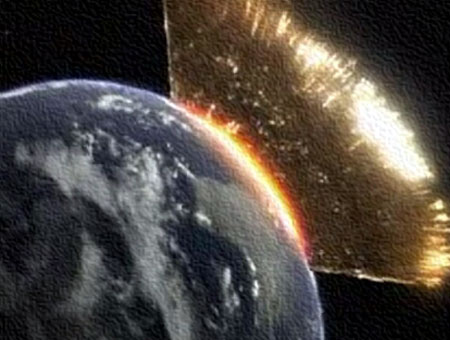 One of the most debated topics is that whether terrestrial life on Earth was formed here itself or whether it arrived here from outer space. Well, some scientists have discovered something that will surely support the stance that the origins of life were transported from outer space.

Proof that our amino acid signature came from outer space was presented at the 235th national meeting of the American Chemical Society. Ronald Breslow is a professor at the Columbia University and a former ACS President. He explained, “These meteorites were bringing in what I call the ‘seeds of chirality. If you have a universe that was just the mirror image of the one we know about, then in fact, presumably it would have right-handed amino acids. That’s why I’m only half kidding when I say there is a guy on the other side of the universe with his heart on the right hand side.”

Most of the life on the planet has chains of amino acids. These amino acids have two types of orientations, right and left. They mirror each other in a way similar to our hands. This is called as chirality and the proteins have to comprise of only one chiral form of amino acids. Except a few bacteria, which are right-handed amino acid-based, Earth is dominated by left-handed ‘L-amino acids’. Breslow stated that the left-handed protein units were bought to Earth by meteorite bombardments.

There are numerous theories that have been put forward which explain the dominance of L-amino acids. One points to the fact that polarized light from neutron stars traveled all zapped right-handed amino acids on the Earth directly. But Columbia chemistry grad student Mindy Levine and Breslow have found that L-amino acids from outer space could directly transfer their chirality to simple amino acids found in living things.

These cosmic amino acids are formed in interstellar space and were acted upon by the light of neutron stars, which trigger the selective devastation of one form of amino acid. Ronald Breslow has also indicated that similar planets like Earth could also have life that has evolved the same way it has over here as meteorites are obviously landing on such planets.