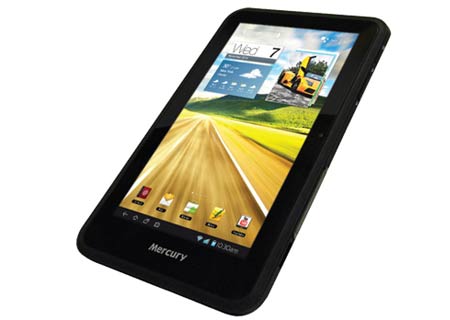 The Mercury mTab streaQ has been unveiled and so has its price details. The tablet is the latest addition to Kobian’s vast lineup of affordable slates which includes the original device that launched back in 2011 for under Rs. 10,000 as well as the Neo and Neo 2 slabs.

The newest member comes with cellular support and it is also deployed with dual SIM slots, both providing access to 3G networks. To make this possible, the company has turned to the MTK 6575 CPU which brings in this compatibility along with other features on a single chip. They include a 1.2GHz single core processor based on the ARM A9 architecture, 1GB of DDR3 RAM and a PowerVR SGX Series5 GPU, so suggests the SOC’s product page for the latter.

The Lenovo IdeaTab A2107 is one of the many devices that run on the aforementioned module. Like most other 7-inch slates, this one also packs in dual cameras. A 2MP snapper is placed onto the rear for snapping up stills and recording videos, while a VGA webcam is situated on the front alongside the 7-inch 1024 x 600p 16:9 capacitive multi-touch display. A 3100mAh takes on the task of getting things up and running, but for how long is a mystery.

Additionally, users will be able to browse the web through Wi-Fi or a 3G data connection. And with Adobe Flash 11 support onboard, they will also be able to access a wide catalog of rich media online including embedded videos. Other feature under the connectivity segment comprise of Bluetooth, GPS and HDMI through which, the slate’s display can be mirrored onto a larger screen in 1080p full HD.

The Mercury mTab streaQ is available for purchase for Rs. 11,499. The slate can be picked up with a 1 year warranty. However, the company is yet to disclose specific outlets and retailers through potential buyers can lay hands on it.

Here’s a quick glance at the key specifications: