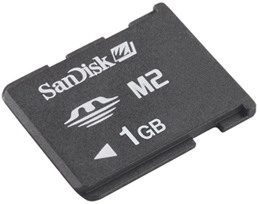 SanDisk Corporation has introduced the Memory Stick Micro (M2) product line, which includes an ultra-thin, removable storage card that can be used with Sony Ericsson’s latest Cyber-shot and Walkman series of mobile phones.

Basically, the Memory Stick Micro was developed by SanDisk Corporation together with Sony Corporation to meet the growing storage needs of the new highly compact multimedia mobile phones. Besides, the M2 card has been designed as an externally removable media with a controlled eject function and side notch, to prevent it from accidentally falling out of the phone slot.

Measuring just 0.59” x 0.49” x 0.05”, the SanDisk M2 card is the second smallest flash memory media in the world, after the microSD cards, which SanDisk introduced a while ago.