The Meizu MX4 was made official earlier this month with an attractive price and there appears to be a Pro version in the works as well. Obviously, this model will have beefier specs and based on the information we have at hand currently, we could actually be looking at one of the first smartphones to pack in 4GB of RAM.

So as to occupy such a high amount of system memory, a 64-bit chip would obviously be necessary. However, it doesn’t look like there’s going to be one on the Meizu MX4 Pro. The leaked specs list which comes via Chinese portal iGeek shows that the Exynos Octa 5430 SOC from Samsung will be in charge of processing power. 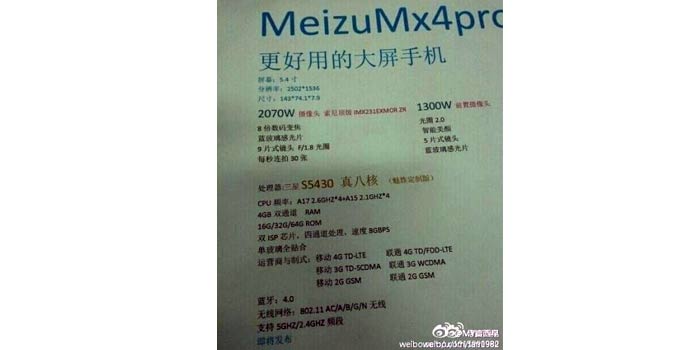 Just so you know, the list seen in the image above mentions that the octa core SoC will have Cortex A15 and A17 clusters in big.Little configuration. The latter is most likely a typo as the Samsung chipset officially houses Cortex A7 cores. Also, the clock speeds provided don’t seem right at 2.3GHz and 2.6GHz respectively.

According to PhoneArena, the processor will support the Large Physical Address Extension technology which basically allows more RAM to be used. Other features of the phone include a 5.36-inch 2560 x 1536 display, a 20.7MP rear shooter and a 13MP front snapper.

While most of the alleged specs of the Meizu MX4 Pro look believable, we’ve got our doubts about the processor details and the claim of 4GB RAM. Also, don’t expect to see the handset go official outside China, but you should be able to ship it globally.