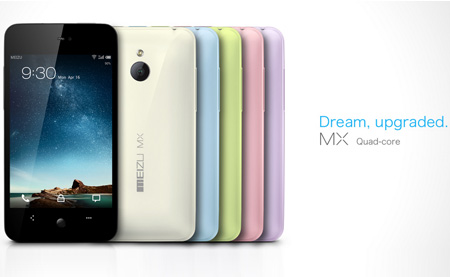 Arriving with the claim of being the first smartphone to fit in a quad core Exynos A9 CPU, the Meizu MX Quad-core handset is garnering its fair share of headlines. And individuals who were taken by its predecessor, the Meizu MX, are probably looking out for what the successor may bring along. Well, the official word is now out.

As many may have expected, the quad core variant is complete with the company’s own Flyme OS which is based on the Ice Cream Sandwich platform for Android loyalists. And the CPU with the 32nm HKMG technology is apparently aimed at reducing power consumption and being 60 percent faster in comparison to its earlier counterpart.

Users should be able to view 1080p videos on the handset’s 292ppi HD ASV display. The device is also embedded with a 1,700mAh battery, while the rear panel flaunts an 8MP camera that sports an f/2.2 aperture lens. Thanks to the BSI sensor, images can even be captured in low-light conditions. Apart from the original white color, the latest handset will arrive drenched in five additional shades. What’s more, the Meizu MX is expected to sell at a reduced price of ¥2,399 in Mainland China and for HK$2,599 in Hong Kong, from April 16, 2012, onwards.

The Meizu MX Quad-core price details for the 32GB version spell out to be ¥2,999 and HK$3,099 in Mainland China and Hong Kong, respectively. The 64GB variant can be grabbed for ¥3,999 or HK$4,099 in the aforementioned regions. Both the versions are expected to begin retailing starting June 2012.