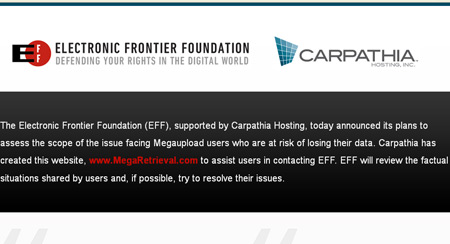 Amidst all the hullabaloo surrounding the shutting down of Megaupload and the implications on user data, Carpathia Hosting and Cogent Communications have agreed to keep hosting the said content for two more weeks. Meanwhile, Electronic Frontier Foundation (EFF) has created the MegaRetrieval website to help hapless users check out their options for recovering legitimate, non-infringing files from the cyberlocker service.

CNET says Megaupload’s U.S. attorney, Ira Rothken, confirmed that the two companies which were hosting the data in question will continue to do so for the next two weeks, at least. This should arrive as a breath of relief to users, chewing over earlier rumors about the likelihood of data getting deleted because the hosting organizations could hardly expect to be paid for their services since the Megaupload takedown by the U.S. District Court.

“Carpathia does not have access to any data for Megaupload customers. We support the EFF and their efforts to help those users that stored legitimate, non-infringing files with Megaupload retrieve their data,” expressed Brian Winter, Chief Marketing Officer of Carpathia Hosting, while elaborating on this news.

The folks over at Carpathia insist that currently, there are no plans to reprovision the Megaupload servers. So customers need not fear a looming data loss situation. Also, an advance notification period of 7 days is being promised in case such an action does come under consideration anytime soon.

At any rate, if it’s going to lend additional credibility to the involved parties, Carpathia Hosting and Cogent Communications will keep Megaupload user data safe for a bit longer.