Finally – After months of speculation and numerous leaks, we can now say that the Lumia 1520 is officially one mighty beast. Unveiled at Nokia World, the phablet is certainly what Microsoft needs to gain the much needed momentum in the smartphone space and the new handset is just what everyone has been waiting for.

Nokia has delivered what almost every Windows Phone user and fan has been craving – High-end hardware components that can stand up against the competition. Thanks to the onslaught of leaks and rumors, there are absolutely no surprises to share. The Lumia 1520 carries a 6-inch FHD ClearBlack IPS LCD touchscreen with Corning Gorilla Glass 2.

Powering it up is a quad core 2.2GHz Snapdragon 800 processor accompanied by 2GB of RAM and 32GB of storage. The exciting part here is that Nokia has thrown in a 64GB compliant microSDXC card slot as well. And along with powerful components comes a large 3400mAh battery which can deliver up to 32 days of standby or around 25.1 hours of talktime on 3G.

The PureView technology is also present here with a 20MP f/2.4 camera featuring 6-lens Zeiss optics and OIS, on the rear. The device comes with the Nokia Camera app (Smart and Pro Camera combined) and it can record 1080p videos with directional stereo sound owing to the inclusion of four microphones. 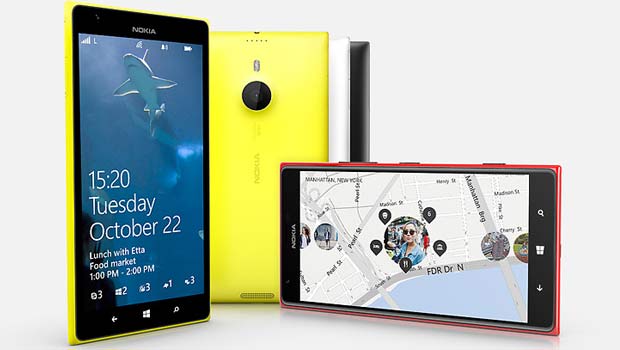 Nokia has estimated that the Lumia 1520 will retail for around $749 without taxes and subsidies. The device is expected to initially go on sale this quarter in Hong Kong, Singapore, China, the UK, Germany, Finland and France amongst others. The device will arrive in the US exclusively through AT&T and the price is rumored at $299 on contract or $699 which is the full retail amount.