Flexible smartphones have been bandied about as a concept for a long time now, but a group of researchers have actually developed the world’s first wireless prototype phone which can bend and support touch inputs. Dubbed the ReFlex, the device could prove to be a major window into the handsets of the future.

The ReFlex was created at Queen’s University’s Human Media Lab. The team behind it utilized an LG Display Flexible OLED 720p touchscreen to make its bending abilities possible. The phone runs on Android 4.4 KitKat, with the board assembled on the side of the display. When twisted, bend sensors on the back analyze the amount of force used and sends this information to apps.

The researches have demonstrated the ReFlex’s bending capabilities by using it to read a book. A person would simply have to bend the smartphone to the right or left to start flipping pages. The pages turn faster according to how much the screen is bent. Additionally, people are supposed to actually feel the page as it moves across their fingers thanks to a vibration feedback system.

Interestingly, the ReFlex could also be used to simulate a more realistic gaming experience in smartphones. For instance, Angry Bird players would be able to bend the phone to stretch the game’s sling shot and sense vibrations similar to how an actual rubber band feels. When they release it, the device sends a jolt at the snap and sends the bird flying.

The ReFlex is also being touted as a super lightweight and unbreakable phone. According to Roel Vertegaal, Human Media Lab’s director, bendable smartphones like it are still 5 years away from being delivered to the hands of customers. 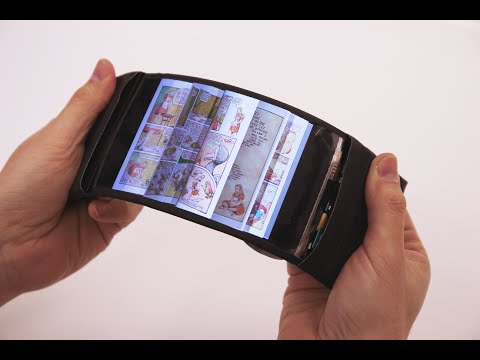