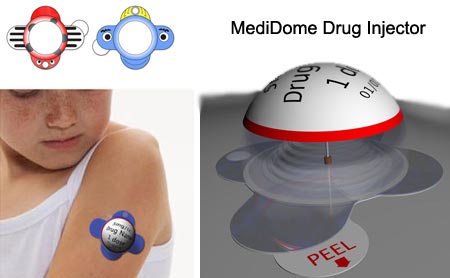 Doctors and people in the medical field now can soon look forward to a needle-free generation for drug delivery which will be a win-win situation for both doctors as well as patients. After the Biojector Intradermal Drug Delivery Device prepare yourself for the latest invention in the field of science which is MediDome Drug Injector.

The MediDome Drug Injector boasts off about its needle-free method of vaccination. The creation of Christopher Holden, MediDome Drug Injector has been greatly appreciated at the RSA (Royal Society for the Encouragements of Arts, Manufactures and Commerce) and the device is set to receive its patent from the same school Christopher attended which is Northumbria University in Newcastle.

The process of delivering drugs across to a patient gets much more simple and convenient with the MediDome Drug Injector and since it does not involve any sort of needles, it avoids the fear of needle-stick injuries. The procedure to use the MediDome injector is as simple as peeling off the sticker of the injector and after placing it on the skin, the blister cap needs to be pressed firmly and the required drug is delivered to the patient. The injector also has an indicator which displays the blood leak, so if you find blood on the indicator, it means that the person needs to stop pressing the blister cap any further.

The advantage that the MediDome product has is that it can be used only once so the risks pertaining to re-use are eliminated, avoiding transmission of viruses such as HIV or blood born diseases. The blister pattern injector uses a soft flexible plastic, pre-filled with a measured drug dose thus ensuring that there are miscalculations in the drug dosage.

Christopher has also approached the Head of Clinical Governance and Risk, the Chief of Electronics and Medical Engineering, and the Head of Health and Safety Adviser during the research stages so that he could ensure the safety of the product. Christopher also plans on reaping its best benefits through the usage of the product in cases of emergency, natural calamities and military use which require mass vaccination.