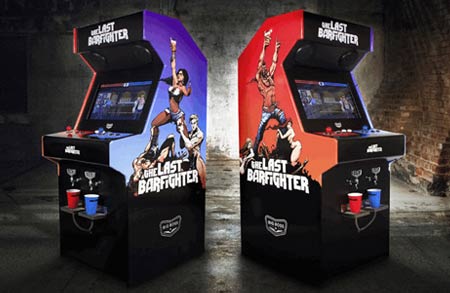 The McKinney Beercade is something that is bound to get office-goers from around the world worked up. What looks from afar to be a typical arcade machine filled with nostalgic effervescence is actually a very different concept of the idea. This piece of hardware allows two folks to fight it out within a custom game developed specially for it, with the winner being rewarded in the form of a nice cold spout of beer.

The brilliant-looking concept that the device is, has been crafted by McKinney Ten Percent, which is the advertising agency’s special department focused on encouraging employees to spend time on other activities aside from their usual ones. This perfect brew that it has concocted is being described as something that could breathe new life into beer tasting and arcade gaming. The machine has been built by replacing the traditional coin-slot of the arcade with an apparatus to spew out beer.

Made for the Big Boss Brewing Company, the invention’s main purpose is to make beer sampling less of a ‘snore.’ Some would disagree with the association of the word ‘snore’ with beer sampling, but that’s what its maker says. Moving on, it has been infused with a Flash-based game dubbed The Last Barfighter. Players will be allowed to choose from a total of five characters modeled around the five year-round Big Boss brews, Hell’s Belle, Bad Penny, Angry Angel, Blanco Diablo and High Roller.

Taking place inside a standard biker bar, this game asks players to fight three rounds with fists, kicks as well as signature moves, so as to win the bouts. The winner will be selected in a best-of-three fashion, and it is in their cup that the brew will be dispensed at the end of it. Speaking about its technical aspects, this apparatus features a few drip trays, cupholders and motion sensors that are occupied within the space which usually holds the coin-slot. Dave Roger, who’s Big Boss Brewing’s marketing and distribution manager, has disclosed that the company plans on using this machine at events aimed at raising funds and awareness for their charitable partners.

At the moment, it can be said that Big Boss Brewing is the only company in the world to have the McKinney Beercade. No other information about it is available.