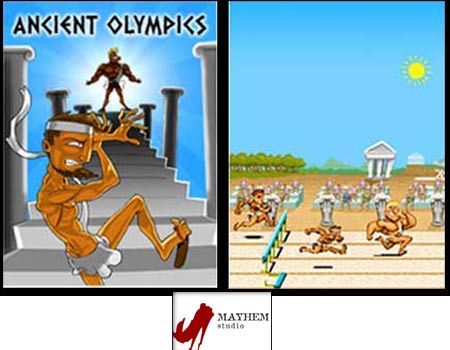 Spain-based Mayhem Studio, the cell phone games developer company, has announced the availability of its latest mobile phone game called Ancient Games. It is based on the Olympic games, allowing players to try out as many games as possible and break all the records in any contest, provided they believe that they can beat the opponents in various games such as a hurdle race, shot put, discus throw and many other such sports.

Via Tournament Mode, make a choice from a wide list of characters and compete in different trials and win in all categories. If gamers are not confident enough of their skills and interest, they can enter the Training Mode to play one of the contests.

You need not worry about loosing or scoring less, both the modes assure advantages in different tests and items along with a complete fun-filled gaming experience.

The above-mentioned gameplay is in a single player mode. For multiplayer mode, you have to access its second version (yet to launch) and closer to the event, where you can show off your expertise to your competitors. The only thing you require to carry forward the game is Bluetooth functionality.

Are you ready to rock the phone screen with the full-action based frenzied games? To boast your unbreakable record, you can also save your scores. This addictive game delivers high-quality performance and resembles the same-style games with a better and bigger platform ‘ready to be played everywhere every time’.