Yet another report has weighed in on the availability of the iPhone 8, claiming that the handset will be considerably more delayed than previous years. Reputed analyst Ming-Chi Kuo predicts that Apple will begin mass production on the device in October/November.

While there have been iPhone shortages in the past, this timeline suggests that people won’t be able to buy the iPhone 8 until early 2018. This is a pretty severe delay, especially if Apple sticks to tradition and announces its smartphones in September. This year isn’t expected to be any different, with many asserting that the iPhone 7s and iPhone 7s Plus will be launched alongside the OLED iPhone.

Kuo thinks the delay in the iPhone 8’s availability will hurt Apple’s 2017 sales since consumers will opt to wait for the handset. Furthermore, he has a pessimistic outlook on the iPhone 7s models since bezel-less handsets from Android manufacturers like Samsung will make the entry-level iPhones less appealing.

Also See: iPhone 8 dummy model gets spotted in the wild

The iPhone 8 has apparently become the victim of significant hardware upgrades. Components like a new 3D Touch module, custom OLED display, custom A11 10nm processor, and 3D sensing cameras are supposedly causing the delay. Interestingly, a separate Chinese leak has purportedly gotten its hands on the internal schematics of the device, confirming most of the aforementioned parts. 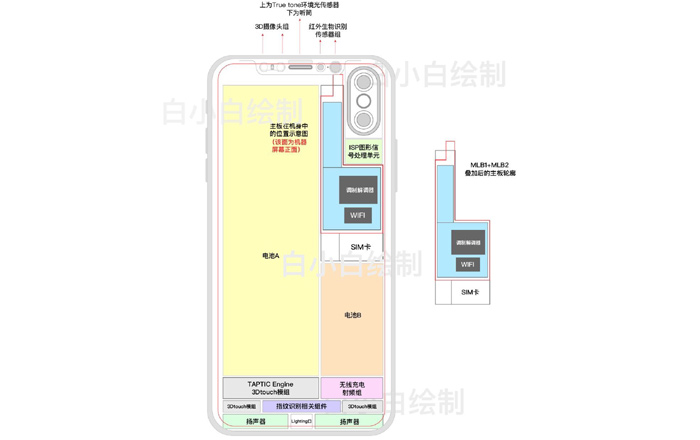 The front of the alleged iPhone 8 features all-new 3D camera sensors, infrared sensors, a facial recognition camera, and a True Tone flash unit. The bottom makes room for dual speakers, a change from the single + dummy speaker setup Apple placed in the iPhone 7. There appears to be two batteries (yellow + orange) inside and a stacked mainboard design to make room for them.

There’s no sign of the home button in the blueprint. A wireless charging module (pink) and fingerprint sensor (purple) can also be seen. The position of the latter hints that Apple might be going ahead with an in-display Touch ID solution, rather than the rear-facing placement suggested by another leak.