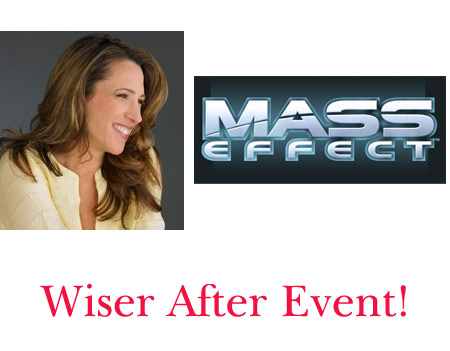 The age-old adage “Never judge a book by it’s cover” can now be rephrased as “Don’t judge and comment on a game without playing it !” That’s probably the sentiment that author Cooper Lawrence would echo after the furor that was raised post her criticism of the inappropriate content in Mass Effect, in her book titled “The Cult of Perfection: Making Peace With Your Inner Overachiever”.

In a debate on Fox News, Cooper condemned the Xbox 360 game without even playing it. This is what led to an uproar amidst gamers. Most of them rushed to Amazon.com to give low ratings and negative reviews to the book. Garbage, hypocrisy, ignorant and hack were some of the tags that were also rendered to The Cult of Perfection: Making Peace With Your Inner Overachiever. In addition, gamers went on to attack Cooper’s book on the Barnes & Noble site too.

However, Cooper has perhaps now grown wiser after event, leading her to acknowledge that she indeed is sorry about her remark. She said, “I recognize that I misspoke. I really regret saying that, and now that I’ve seen the game and seen the ‘inappropriate’ scenes. It’s kind of a joke. Before the show I had asked somebody about what they had heard, and they had said it’s like pornography. But it’s not like pornography. I’ve seen episodes of ‘Lost’ that are more explicit.”

EA had written a letter to Fox News Channel asking the organization to rectify the assumed inaccuracies during a news segment on BioWare’s Mass Effect game.

Cooper’s apology may have consoled gamers to a certain extent. But wonder what’s going to happen between EA and Fox post this controversy?