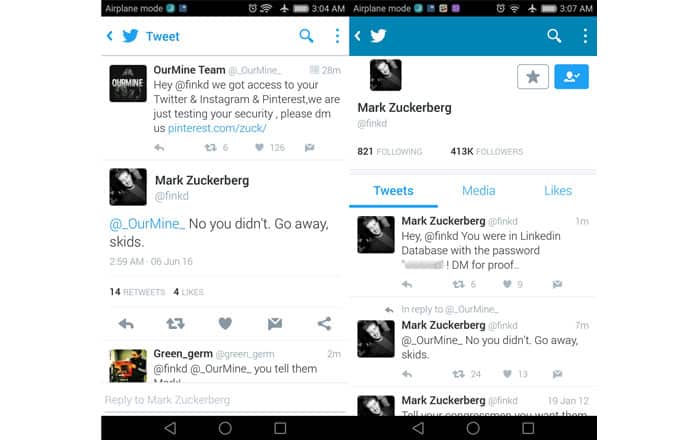 In news meant to make us all feel better about not changing our passwords often enough, Facebook CEO Mark Zuckerberg’s LinkendIn, Twitter and Pinterest accounts have gotten breached. Hacking group OurMine Team has taken credit for the entire thing, defacing his social media pages to brag about their exploits.

It’s not entirely clear how OurMine Team managed to pull this wide-scale attack off. The strongest theory suggests that they accessed his LinkedIn credentials via a massive password breach which had occurred back in 2012. The incident had resurfaced on the news recently when it was revealed that over 117 million user emails and passwords had gotten stolen, much more than the original 6.5 million which the company had claimed.

Following this revelation, LinkedIn had asked its members to reset their passwords. It looks like Mark Zuckerberg didn’t pay any heed to this since OurMine Team has apparently managed to find his password ‘dadada’ in the site’s database. Apart from the crime of having such a simple password, the Facebook CEO also committed the cardinal sin of using it for his other accounts as well.

Zuckerberg’s Twitter and Pinterest were summarily hacked and defaced for the entire world to see. Both were suspended temporarily and later reinstated. It’s worth noting that neither account was very active, with the CEO’s last tweet getting sent out in 2012. OurMine Team also claimed that it had hacked his Instagram account, but a Facebook spokesperson later clarified that this was false.

If nothing else, the entire fiasco should serve as a timely reminder of the importance of regularly changing your passwords, especially if you have a LinkedIn account. It also goes to show that even someone as tech-savvy as Mark Zuckerberg can fall victim to a simple hack.