Mario versus Sonic at the Olympic Games, announced by Sega and Nintendo 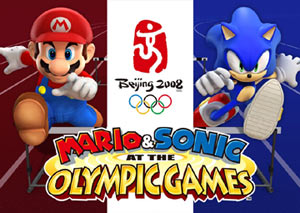 Two of the biggest and most loved icons in the entertainment industry are now set to appear in a game together. Any guesses? Well, today, Sega and Nintendo jointly announced that Mario and Sonic will be joining forces and will star in a new game called ‘Mario & Sonic at the Olympic Games’. This game will be released for the Nintendo Wii and DS game systems.

In ‘Mario & Sonic at the Olympic Games’, players will be competing in events that take place in environments based on real-life venues of the Beijing 2008 Olympic Games.

According to Hisao Oguchi, President and Chief Operating Officer, Sega Corporation, “We are thrilled to partner with Nintendo and ISM on this groundbreaking title. For the first time, two of the world’s greatest games’ characters come together to compete in the world’s greatest sporting event and we couldn’t be more excited.”

‘Mario & Sonic at the Olympic Games’ will be published by Sega across the European and North American market and by Nintendo for the Japanese market. The game which is slated to be available for Christmas 2007 has been licensed through a worldwide partnership with International Sports Multimedia (ISM), the exclusive interactive entertainment software licensee of the International Olympic Committee (IO).

According to Shigeru Miyamoto, Senior Managing Director and General Manager, Entertainment Analysis and Development Division, Nintendo, “Mario and Sonic have been respectful rivals since the early days of video games, In fact, for a long time they have been discussing the possibility of one day competing against each other. Now that they have been given the perfect opportunity to meet at the Olympic Games, we may finally learn who is actually faster, Mario or Sonic?”

That would indeed be interesting to find out. We have yet to come to terms with this announcement which will surely go down in history. We still cannot believe that Mario and Sonic will come together for a game and that too at the Olympics! Can you?