Mario Kart Coming to US in April with the Wii Wheel 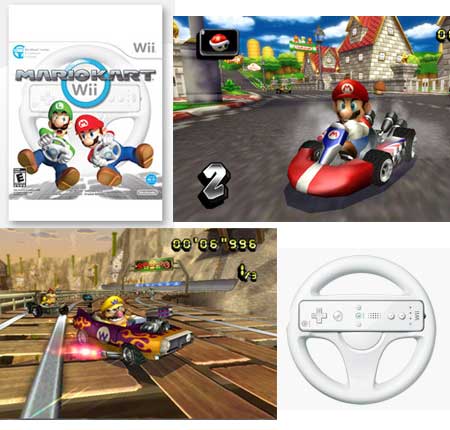 Nintendo has announced its plans to launch its Mario Kart game for the Wii in the US. The game will be released in the American market on April 27. The Mario kart will come along with the Wii Wheel, which will enable gamers to compete against veterans.

Besides, the game will also include a broadband hookup to Nintendo Wi-Fi Connection allowing players to compete with up to 11 other drivers from around the world for racing dominance.

“Mario Kart Wii transforms one of our most popular franchises into a race that every member of the family can join,” said Cammie Dunaway, Nintendo of America’s executive vice president of Sales and Marketing. “Driving with the Wii Wheel could not be more natural, and this is one place where speeding is encouraged.”

The new Mario Kart will include 16 new courses and 16 classic courses from previous Mario Kart games. Also, it will provide gamers the option of racing with either karts or motorbikes. That not all; players can also race with their personalized Mii caricatures.

Moreover, Nintendo is ensuring the fun and enjoyment with tons of racing, plenty of power-ups and oodles of objects for players to use to slow down other drivers.

The peripheral, Wii Wheel is also available separately in the market, so that all players in one household can drive with it. However, it is not compulsory to play with the wheel only. The game also supports four different control options including Wii Remote with or without the Wii Wheel, Wii Remote and Nunchuk controller combo, Classic Controller and even the Nintendo GameCube controller.

The new Mario Kart Wii Channel will also be added to the Wii Menu to enhance game play. Through this, gamers can compete in tournaments, check worldwide rankings, see when their friends are playing and download ghost data.