Google’s doing something special for Mario Day (MAR10) this year, transforming Maps into a playing ground for the Italian plumber to drive around in his kart. The special feature will be sticking around for a week, so you’ll have plenty of time to get yourself acquainted with your new driver.

While you could dismiss this as a blatant promotional exercise for Nintendo and Google Maps, there’s no denying that the idea is a lot of fun. To get started, you’ll have to update Maps to its latest version from the Play Store or App Store.

Once this step is completed, you should see a new golden yellow ‘?’ icon at the bottom right next to the start button when you enter a destination. Clicking on it will prompt up a window telling you it’s Mario Time and asking you to choose between ‘LET’S-A-GO!’ or ‘NO THANKS.’ 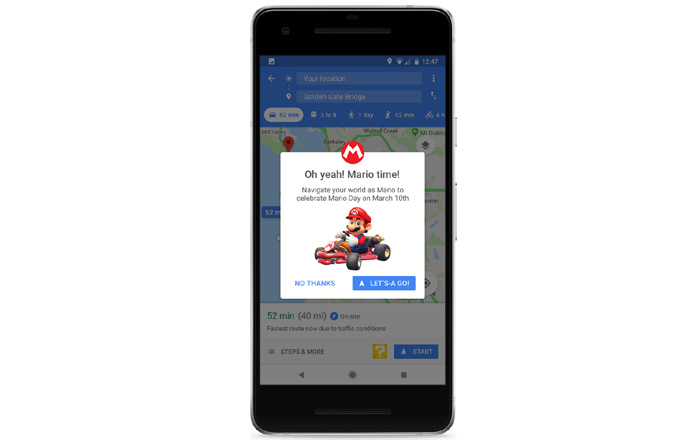 Google’s even included a small Easter egg in Mario Time for all you dedicated Nintendo fans. Tapping on the ‘?’ icon 100 times will trigger a 1-UP sound just like in the latter’s games. Once you’re in the mode, the standard navigation arrow will turn into Mario driving on his kart.

There won’t be any banana or red shell throwing, sadly, since Mario’s supposed to serve as just a simple position marker. Google wants you to take screenshots of your route and share it on Twitter or Instagram. Make sure you don’t share personal information like your home or work address though.

You can download Google Maps via the Play Store and App Store. Mario Time is supposed to be available globally starting from today, so watch out for the update.