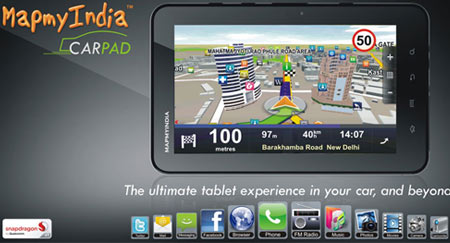 The newest device to zoom onto roads in India is the MapMyIndia CarPad fuelled by Qualcomm’s Snapdragon S1 processor. The device sports a 7-inch capacitive screen alongside support for 3G and GPS.

This 7-incher Android device promises to deliver a rich app experience with features which could add to the convenience of car owners. The CarPad comes with turn-by-turn voice guidance alongside 3D landmarks, buildings and house-level details. It can be used conveniently in the front or backseat with the bundled car kit’s head-rest and windshield mounts.

Rakesh Verma, Managing Director, MapmyIndia, says, “We are excited to launch CarPad which will revolutionize the way people travel in cars in India – because of the simple, ingenious way in which it offers navigation, entertainment, connectivity and productivity to everyone in the car, be it in the back-seat or the front-seat. For the industry, we see CarPad heralding a new era of the smart, connected car – seamlessly merging the consumer’s connected lifestyle into the car.”

The built-in 3G, Wi-Fi and Bluetooth form the connectivity options of the MapMyIndia CarPad. This makes calling, messaging, chatting and browsing the web quite easy. Also, provision has been made for in-car entertainment allowing users to watch movies, Youtube, groove to tunes or flip through those cherished memories.

The MapMyIndia CarPad along with 8GB SD card, pre-installed MapMyIndia Navigator Aura and car kit can be picked at a price of Rs. 22,990. The car kit packs in headrest mount, windshield mount, CarPad holder and car charger. The CarPad will hit store shelves by September 15.