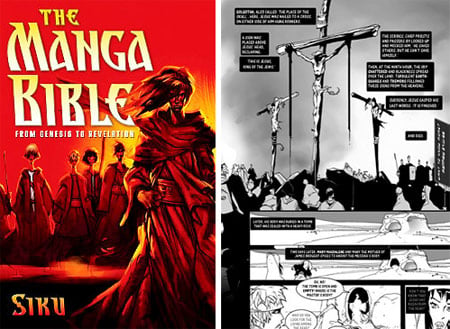 Manga comics are a favorite with all age groups, right from teenagers to the older crowd. Filled with action, exaggerated body language and spikey hair, these graphic novels are surely treated as though they are holy books by the niche crowd who are totally addicted to them. Now, the real “Manga Bible” has arrived, courtesy Ajinbayo Akinsiku, commonly refered to as Siku, who wants the entire world to know Jesus Christ without the act of preaching.

Siku who hopes to become an angelican priest some day has named this comic “The Manga Bible: From Genesis to Revelation.” In the manga version of the Bible, Christ, the Son of God is “a samurai stranger who’s come to town and he’s a tough guy, seeking revolution and revolt.

In the Manga Bible, you will see everyone from the Greatest Story ever told including Noah getting boggled counting the animals entering the Ark saying, That’s 11,344 animals? Arghh! I’ve lost count again. I’m going to have to start from scratch!”

Abraham rides a horse out of an explosion to save Lot. Og, king of Bashan, looms like an early Darth Vader. The Sermon on the Mount did not make the book, though, because there was not enough action to it.

The Manga Bible sells for $12.95 and till date has managed to seel around 30,000 copies in Great Britains.

It is quite an awesome concept to take an age old story and transform it into something relevant to the general masses. Perhaps someone should make a Manga version of the action-packed Indian mythological epics like Mahabharata! Tell us what you think….