Apple finally joined the wireless charging brigade with the iPhone X, iPhone 8, and iPhone 8 Plus last year, but there are plenty of people out there who want the feature on their older iPhone as well. YouTuber Scotty Allen took on this challenge in new video for his channel Strange Parts and emerged victorious.

You might remember Allen as the guy who made an iPhone 6S out of spare parts in China and then drilled a working headphone jack into the iPhone 7. The former software engineer and current hardware hacker says he’s been swamped with requests to add wireless charging to an iPhone 6S or iPhone 7, but held off because it sounded very hard. 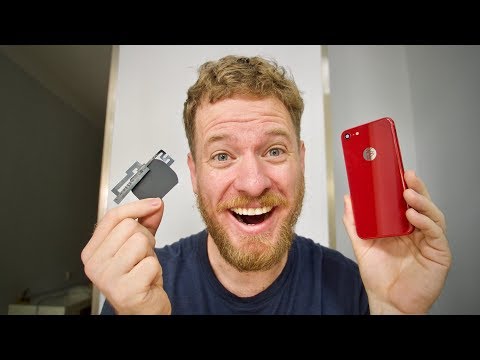 Allen’s attitude changed when a Chinese man named Yeke came forward and claimed he’d designed a circuit board to allow wireless charging on iPhones. The two decided to collaborate to try and introduce wireless charging to the iPhone 7.

The journey definitely wasn’t easy, with plenty of failed attempts and hunts for specific parts in the busy streets of Shenzhen. One key issue was the iPhone 7’s metal back. Metal doesn’t support wireless charging, hence the switch to glass in the iPhone 8/X.

Their hard work paid off in the end since they finally got the iPhone 7 to work on a wireless charging pad. It’s not clear what kind of speeds he got, but wireless charging is typically slower as compared to traditional wired systems. If you’re interested in doing some DIY work on your iPhone 7, Allen is selling a kit for $70 on his Strange Parts site.

You’ll get a glossy red iPhone 7 shell with the Strange Parts logo, a wireless charging module, an extra cable for the wireless charging module in case you destroy the current one, foam padding for the connector, and online installation instructions. Allen warns that this kit is only for adventurous souls who are willing to take up a challenge and have an iPhone 7 to spare.