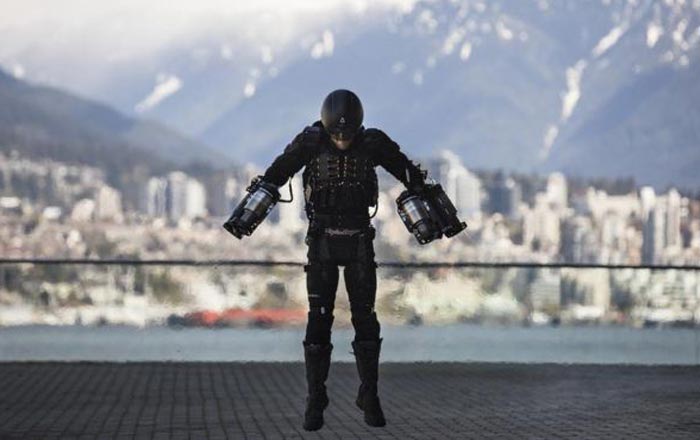 Iron Man’s flight suit has just escaped the panels of comic books out into the real world thanks to a British inventor named Richard Browning. He’s managed to successfully demonstrate his jet pack technology at the Vancouver TED conference in front of an awestruck audience.

Browning is the CEO of a startup called Gravity which has filed patents for a human propulsion technology that re-imagines manned flight. His ‘Daedalus’ suit is made out of a specially designed exo-skeleton dotted with 6 miniature jet engines to allow for vertical flights.

There’s even a cool helmet with a heads-up display which he can use to keep track of fuel supply. Browning says he uses his arms to control where he’s going and adjust the speed. The Daedalus is supposedly capable of flying around at 200mph at a height of a few thousand feet for about 10 minutes.

As demonstrated at TED and in the test video below, Browning’s Iron Man suit isn’t quite ready for long distance trips. He flew around in a circle for a short period of time at the former, hovering at a small distance above the ground. He kept the altitude and speed low for safety reasons, asserting that it’s safer than a motorbike.

Browning became an internet sensation back in March when Gravity began posting videos showing off his futuristic suit. He doesn’t think the tech will become mainstream anytime soon, calling it a bit of fun. That’s not the way the British military sees it though. They apparently told him they’d given up on flying humans around until they saw his suit in action.

Browning has dropped a few hints at the future of his Iron Man suit, mysteriously talking about new technology that would make the current prototype look like child’s play.