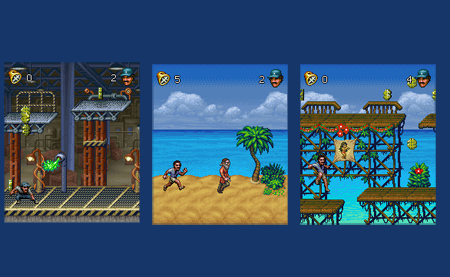 Mobile game creator and publisher Ojom has announced the launch of ‘Magnum P.I.’, which is an adaptation of the hit US detective series.

Magnum P.I. allows gamers to live the dream in Hawaii fighting crime as private investigator Thomas Magnum. The game has been specifically designed to be played on a mobile phone.

You are Thomas Magnum, ex US-Navy seal turned private investigator, and it’s your job to scour
Hawaii for known criminals in your loud beach shirts. Make sure you pick up as much of the stolen loot as possible along the way to ensure you get enough evidence to catch the gangsters. You can use the
information provided by your buddie T.C. as he flies you around in his famous helicopter.

You start the game with some training on the sunny beaches of Hawaii, avoiding obstacles and jumping across canyons collecting coins and priceless team rings Magnum and his pals got in Vietnam. In your next stage of training it is important to collect as many of those team rings as possible, as it will get you an all important extra life. As you progress through the training and begin your investigations you are asked to complete various tasks, each taking you a step closer to catching the criminals. As you progress through the game your final task is to rescue long-time friend Higgins, who has been kidnapped by a notorious crime organization.

Magnum P.I. runs in over 20 levels, including bonus levels with the ultimate goal of catching mobsters and becoming the top Private Investigator Run, jump and slide through the different missions, try
the double jump and slide for extra smooth Magnum style. Controlling Magnum couldn’t be easier, as you run automatically and use your phone’s keys to move your character; press up to jump and down to slide.

According to Marc Bube, Channel Manager, Ojom said, “Magnum P.I is an exciting addition to our range of mobile game titles. Many people will remember the immensely popular and iconic 80s TV series. This is an exhilarating and addictive jump ‘n’ run style game that we hope will appeal to a cross section of mobile gamers.”

Magnum P.I. is now available on all Java-enabled mobile phones from all major mobile operators in a range of European languages.