The ability to edit a post after it has been published is probably one of the best features we’ve seen roll out. In fact, we’re wondering why the SNS didn’t offer this capability all along. Nevertheless, the option is now available to everyone on the website including Android users, while those on iOS should expect an update to arrive soon.

TechCrunch points out that the possible reason for the feature being rolled out so late could be the fear of issues being caused by users turning their posts around. For example, we could say that ‘Apple’s iPhone is the best’ and after people agree (would they?) or disagree on the subject, the entire the post can be turned around to something like ‘Apple’s iPhone isn’t the best.’ 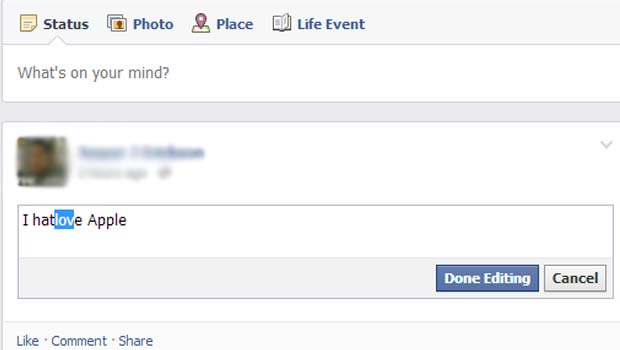 While that does qualify as an issue or misuse of the feature, there are multiple benefits of the new capability, most notably the option to edit out typos and errors from a post instead of deleting and resharing content all over. What’s worth mentioning is that only posts made on personal accounts can be edited as Pages haven’t been given the freedom to modify content as yet.

Back in June the company announced that comments could be edited from the main website. The SNS also unveiled a new capability where users could post an image along with text as a comment.

The updated Android app can be downloaded from Google Play, while the iOS application will be available soon on the App Store. There’s no word on whether the ability to edit posts will be available on the mobile version of the website.