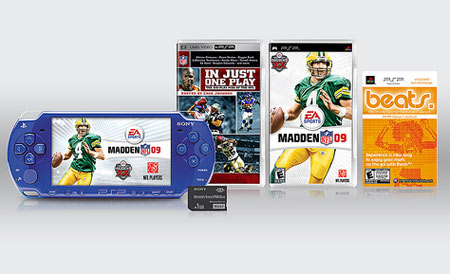 The NFL 09 PSP package will include the PSP system in Metallic Blue colors with the highly anticipated Madden NFL 09 game – NFL: In Just One Play on UMD (Universal Media Disc) Video from Warner Bros.; a PlayStation Network voucher to download Beats from PlayStation Store (accessible via a PC); and a 1GB Memory Stick PRO Duo. Gamers can store photos, music, video and other content on the provided memory stick.

“Sports games are one of the most popular types of games among PSP owners, and it was only natural to make our next PSP Entertainment Pack a sports-themed bundle,” said Scott A. Steinberg, Vice President, Product Marketing, SCEA. “PSP continues to have great momentum in the marketplace. We expect that the Madden NFL 09 PSP Entertainment Pack will capitalize on this momentum and strengthen PlayStation’s presence in the sports genre.”