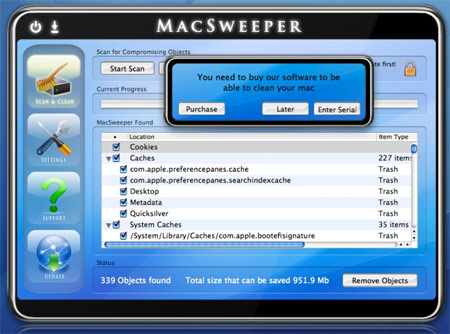 For a long time it has been believed that Apple’s Mac computers were completely safe from remote attacks, viruses and other forms of security risks. In fact, most people bought Macs not only for their user-friendly and intelligent interface, but also for security purposes. However, it has come to be known that a malware named MacSweeper is doing the rounds on the Internet, duping people into buying it by identifying bogus security risks.

Finnish Security company F-Secure has identified MacSweeper, the first-of-its-kind rogue application written for Mac computers. It claims to clean your Mac computer from compromising files and will always find something to either fix or clean. Here’s the catch- the only way you can do so is by buying this fake software.

Basically, the MacSweeper software offers to remove fake security problems on Macs on purchase of a $39.99 lifestime subscription to the software

Interestingly, this kind of malware is also known as “scareware” since it actually scares people into buying the program or software, for no actual benefit as such.

Windows users might already know this malware as ‘Cleanator’. But, now Cleanator’s sibling has arrived in the form of MacSweeper for Macs. The creators appear to be the same too and are probably located in Ukraine.

Patrik Runald, security response manager for F-Secure wrote in a blog posting that says, “So what does the first Mac rogue application really mean? It means that with Mac’s growing popularity and growing user base comes certain problems that can’t be ignored. […] It doesn’t mean that Mac is becoming less secure in and of itself. But it does mean that Mac users will have to watch out for social engineering tricks just like Windows users have had to do for years.”

Incidentally, the rise in malware for Mac computers seems be escalating as this warning from F-Secure comes just a week after security researchers Patrick Jordan and Adam Tomas from Sunbelt Software warned of the appearance of another version of Trojan.DNSChanger. This is a Mac malware that attempts to dupe Web site visitors into installing a media codec to enable video viewing.

From the looks of things, nobody is safe and secure anymore!