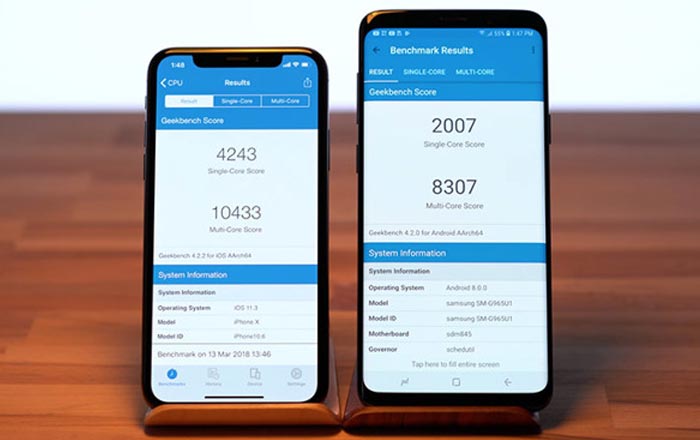 The Galaxy S9+ was recently put through the ringer in a series of speed tests and was unable to beat the iPhone 7 and iPhone X. However, a new report by AppleInsider finds that the Samsung handset isn’t doing that badly when compared to Apple’s flagship phone.

The Galaxy S9+ grabs hold of 6GB of RAM and an octa-core Snapdragon 845 processor, while the iPhone X packs 4GB of RAM and a hexa-core A11 Bionic SoC. The latter is at a disadvantage when it comes to RAM, but typically makes up for it with software-hardware efficiency.

This was best on display during the Geekbench 4 test as the iPhone X claimed victory over the Galaxy S9+. The former scored 4243 in its single-core test and 10433 in its multi-core one. The latter lagged behind with a single-core score of 2007 and a multi-core score of 8307.

The iPhone X managed to perform better than the Galaxy S9+ in the graphics test as well, but by a smaller margin of 15177 to the Samsung flagship’s 14308. The AnTuTu benchmark turned the tables for the phones, with the Galaxy S9+ beating the iPhone X handily with scores of 263661 and 211652, respectively.

The publication attributes this win to the big improvements Qualcomm made to its graphics chip in the Snapdragon 845. Still, this wasn’t enough for the Galaxy S9+ to outrace the iPhone X when it came to AnTuTu’s HTML 5 test, with the smartphones scoring 33924 and 37461, correspondingly.

Overall, it would be fair to say that the Galaxy S9+ and iPhone X are pretty much neck-to-neck when it comes to raw performance. Samsung appears to have cleared the gap between itself and Apple by a long shot in terms of power.