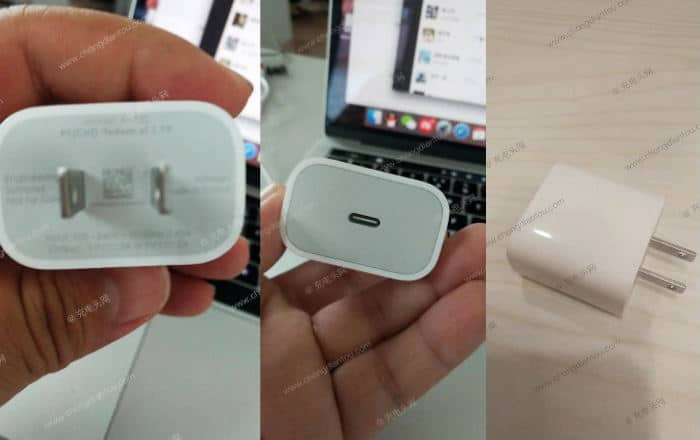 Apple’s next iPhones are 2 months away and rumor has it that the trio is not going to take hours to charge this time round. There’s now fresh evidence of this thanks to a set of photos which have emerged through Chinese social networking site Weibo.

Chinese tipster MMDDJ later reposted the images on Twitter. The live snaps are purportedly of a USB-C charger for the 2018 iPhones. It seems to be an engineering prototype, so it might look different officially. Still, it’s a strong indication of what’s to come.

The current iPhone X, iPhone 8, and iPhone 8 Plus all come with slow 5W chargers in spite of having support for fast charging. The only way to take advantage of the feature is to buy a separate adapter and cable either through a third-party firm or Apple itself.

You may not have to do that this year since the charger seen above outputs either 5V at 3A (15W) or 9V at 2A (18W). This is a huge leap over the old 5W charger. As a matter of fact, even the iPad’s 12W charger is much slower in comparison.

This faster speed has likely been brought about by the switch from USB-A to USB-C. All iPhones so far come with USB-A connectors at one end and a Lightning connector at the iPhone’s end. Apple’s 2018 iPhones might shake things up by converting to a USB-C to Lightning cable.

This is great news for MacBook owners since Apple has ditched USB-A completely in its latest laptops. Not so for Windows users since not all notebooks carry support for USB-C. The latter group will probably have to buy dongles if they want to connect their iPhone to their computer.

There’s always the possibility that Apple will sell this USB-C charger separately and continue packing the slow 5W USB-A charger with its next set of iPhones. With all the evidence stacked against this though, this situation sounds unlikely.

After all, iPhones are supposed to be premium smartphones. It doesn’t make sense to provide sub-par accessories which don’t fully exploit the handset’s potential.