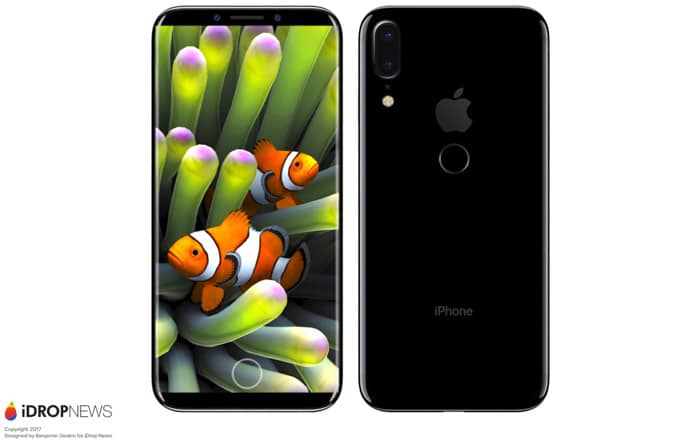 A new report has some fresh information about the iPhone 8, contradicting a couple of previously leaked features and dropping a few bombshells along the way. Apple’s apparently going to relocate the fingerprint scanner to the back and place a vertical dual camera setup there as well.

The source behind this information seemingly got their data from a Foxconn employee who has seen a final-stage iPhone 8 prototype. The insider told iDrop News that the device will be called the iPhone Edition, something which has been rumored before.

The iPhone Edition is reportedly going to feature a vertical twin snapper setup rather than the horizontal one the iPhone 7 Plus currently carries. The reasoning behind this is that the new position will make way for better depth-of-field when the smartphone is placed horizontally inside an AR/VR headset.

Even the front-facing shooter setup may be of the dual lens variety to pave the path for 3D sensing camera technology. The source also claims that Apple has abandoned its glass sandwich design. Instead of a glass back, the iPhone Edition might feature a metal back.

Apple apparently chose the latter over the former due to the tendency of glass to shatter when dropped. Another big contradiction from earlier reports is the moving of the fingerprint scanner to the rear. Speculation so far has insisted that the firm was looking to place a fingerprint scanner underneath the display.

However, it seems the technology behind this isn’t ready for the big leagues, which is why Apple has supposedly decided to play it safe with a circular ring. While this is a common feature for Android phones, all iPhones till date have had a home button-embedded Touch ID sensor.

A back-facing scanner would translate to people having to lift the iPhone Edition up to unlock it, an action which will likely be seen as a huge drawback for many. Apple might be exploring alternatives to this in the form of facial recognition.

Finally, the source asserts that the iPhone Edition will have a slightly curved 2.5D edge-to-edge OLED display and not a completely curved one as has been rumored before. Given the unreliable nature of this leak, it’s best to take it with a pinch of salt until something more solid comes along to back up its predictions.