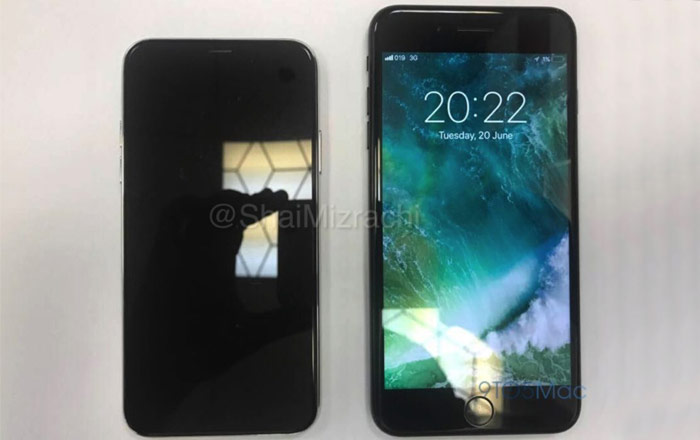 iPhone 8 leaks are pouring out of every corner now, with two separate sources now posting hands-on videos with a dummy unit of the handset. The device which has gotten captured on camera in both cases looks like the same prototype which first got leaked in April 2017, making it more than likely that this is the final design Apple is sticking to.

The video below was posted online by Shai Mizrachi and 9to5Mac. The dummy iPhone 8 seen in the footage features a black body and silver frame, but the real model will probably switch to an all-black color scheme. The unit has also been compared to the iPhone 7 Plus to gauge its size, coming off as quite a bit smaller than the latter.

All the greatest iPhone 8 hits are here, from the elongated power button, border-free display, vertical dual cameras, and glass sandwich design. An ear speaker can be seen up front towards the top. This can be taken as evidence of Apple placing a small cutout to house the component and 3D selfie cameras, interrupting the all-screen look.

Reactions to this intrusion have been mixed at best, with many hoping Apple comes up with an innovative solution so that it doesn’t come across as an eyesore. As for the second video, it comes via Israeli website Tech Walla and Shai Mizrachi yet again. It appears to be the same dummy unit, once again getting compared to the iPhone 7 Plus.

It’s possible the dummy iPhone 8 shown off in the videos is inaccurate, but for now it seems like the real deal.