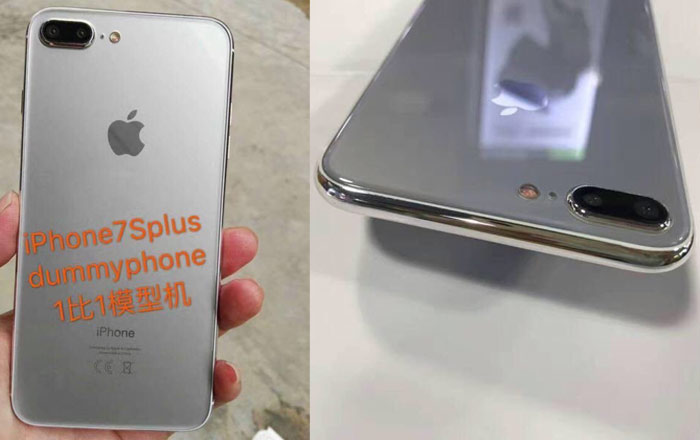 With all the hullaballoo over the iPhone 8, we’ve seen and heard little about the iPhone 7s and iPhone 7s Plus. That ends now thanks to a trio of photos shared by frequent Apple tipster Sonny Dickson with 9to5Mac.

The images apparently feature a dummy model of the iPhone 7s Plus. The handset certainly looks believable, sporting the same basic design as the iPhone 7 Plus with the exception of the glass layer on its back and metal frame. This falls completely in line with speculation so far, with many claiming that the handset will look similar to its predecessor.

The glass back is a big hint towards the inclusion of wireless charging in all three 2017 iPhone models. The technology is incompatible with metal, hence the switch to glass on the back. The handsets will likely depend on a separate inductive charging pad to get fueled up.

Interestingly, it seems the addition of glass to the iPhone formula has resulted in the elimination of the antenna bands on the rear surface, giving the iPhone 7s Plus a cleaner look than its previous variant. Glass allows free passage of signals, while aluminum blocks them.

There appears to be 4 small white strips on the metal frame though, so the antenna bands might not be gone completely. The design might inspire nostalgia among those who remember the iPhone 4 which similarly featured a glass back and steel frame.

The iPhone 7s and iPhone 7s Plus will probably start at the same $650 and $769 price tags as its predecessors, but may pack faster A11 processors and a new 64GB minimum storage bump. The two will probably come out in September alongside the iPhone 8.