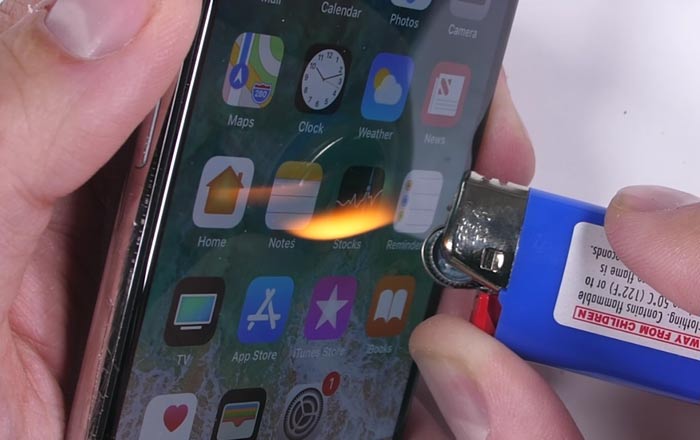 The iPhone X has been out in the world for a few days now, inspiring several people to torture the phone to see just how all that glass holds up. As you might recall, Apple had made a big point of communicating that it had used the most durable glass ever in a smartphone when it announced the handset.

JerryRigEverything took this claim to task by evaluating just how scratch and bend resistant the iPhone X is. He starts out with the former, using a set of Mohs hardness picks to test the all-new OLED display. The device performed on-par with other flagships, taking till level 6 to show some damage.

Thankfully, everyday items in your pocket like coins and keys won’t put a dent on your iPhone X. JerryRigEverything even tried cutting the screen and 7MP selfie camera with his stainless steel razor blade to no effect.

The same held true for the back of the glass-laden iPhone X, but here he warns that items above a level 6 such as granite countertops, tile, and pocket sand could cause damage. However, he notes that the glass is still very susceptible to injury, as demonstrated by him managing to shave off pieces of it from the sides.

Apple’s actually placed a plastic buffer between the stainless steel frame and glass to prevent cracking, but this won’t stop the material from shattering from heights. This is key since the company charges an eye-watering $549 to replace the part.

JerryRigEverything had a lot of good to say about the stainless steel frame, stating that it was tougher than the aluminum one Apple has favored in the past. The OLED panel also performed well in his burn test, turning white after 25 seconds of being held to the flame. The touch sensitivity disappeared for a while, but eventually came back after the smartphone cooled down.

Finally, the iPhone X passed the bend test with flying colors. There was some minor flex, but the screen didn’t pop out. While JerryRigEverything admitted this was an incredibly solid phone, he pointed out that its glass-centric design held it back from being completely durable. It’s best to be extra cautious with it or invest in a case in case you have butter fingers.