The Apple iPad Pro is believed to house a monstrous 12.9-inch display, and its makers will naturally want to optimize its software to take full advantage of the screen estate. We are being told that the device will be able to simultaneously run two full-size apps side by side.

This is a bit different from the multi-tasking feature that’s available on the iPad Air 2 and the iPad mini 3 which condense their apps to fit into the space. This ‘Pro’ tablet device is expected to be launched alongside an iPad mini 4 as well, which will come with its own set of improvements.

The reliable 9to5Mac has learned from its sources that although the 12.9-inch display-equipped iPad Pro will be unveiled by Apple tomorrow, its sales will take quite a long time to commence due various production reasons. According to the report, its pre-orders will begin in October, whereas shipping will only start by the end of November. 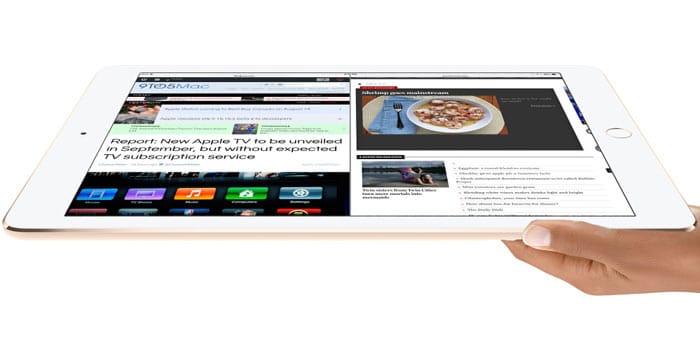 Its base model will offer 64GB of storage, thus indicating that it will be targeted straight up towards professionals, as its name suggests. There will even be a 128GB option and LTE variants that will accompany Wi-Fi-only models. By the time its launch date arrives, the iPad Pro will have iOS 9.1 pre-installed on it.

This tablet is expected to come equipped with an A9X chip that will be a ‘large leap’ over the one offered by the iPad Air 2. A stylus and two different types of keyboards will apparently be sold separately by Apple.

As for the pricing, it is being said that the new iPad Pro tablets will fall in the same range as the latest MacBooks from the company. This will really make it a choice between spending around $1000 on a large tablet or a small laptop.