eBay has just sent a coupon code as well as the ‘exclusive pre-launch’ details of the iPhone 5S and iPhone 5C for India to certain customers. Accordingly, the Apple handsets are noted to start shipping out from October 1 onwards.

The 16GB iPhone 5C is pegged at Rs 49,900, while the iPhone 5S (presumably 16GB) costs Rs 71,990. After the discount is applied, the prices water down to Rs 46,900 and Rs 68,990, respectively. eBay doesn’t actually stock up on goods for sale, but offers a platform for vendors to sell their stuff through its online marketplace.

It looks like at least one merchant is expected to kick off deliveries for the handset by October 1. Of course, this does not necessarily guarantee that it’s the best price at which you could buy either of the two devices. But Apple has been keeping mum about the release of the two iOS 7 devices in India; so eager fans are probably on the watch out for the handsets. 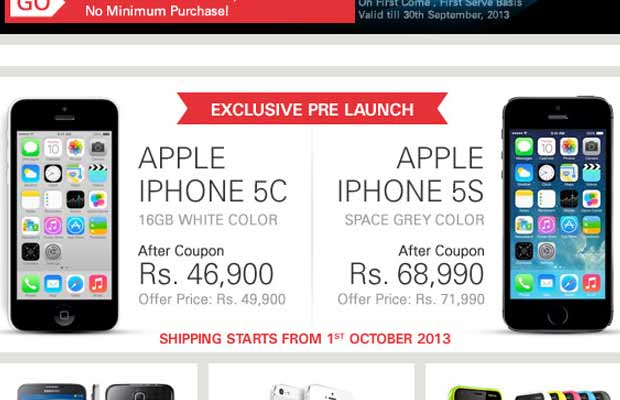 Apple’s boasts of its runaway success with the new iPhones is backed by the 9 million units it sold within three days of launch, never mind that the fingerprint sensor on the 5S isn’t hacker-proof. The point is that the company still stirs up a frenzy each time a next-gen iDevice is launched.

– Trying to make up your mind about which one to buy? Here’s an iPhone 5S vs iPhone 5C specs showdown.

– How crazy are Apple fans?